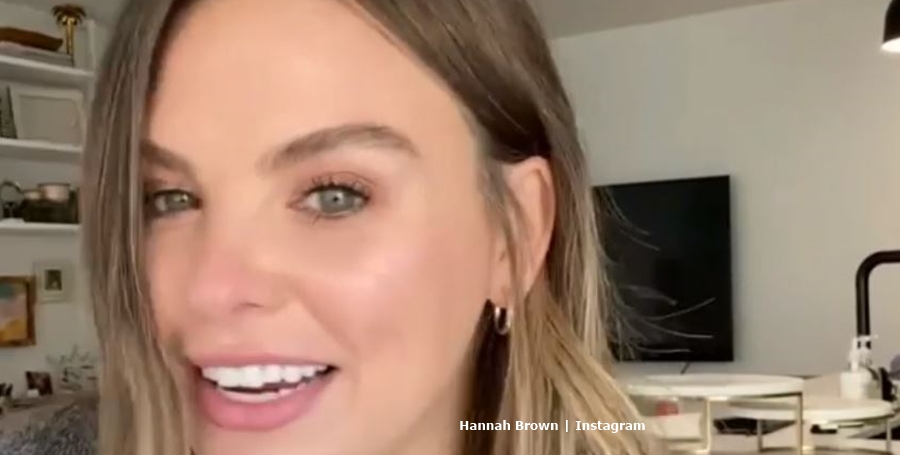 Hannah Brown is allegedly secretly dating a non-Christian. And if you find that hard to swallow, you’re not alone. It comes after news that the former Bachelorette started looking for love again. And most of her fans hope she finds someone. But if there’s any truth to the allegation about her dating this particular person, fans hope it’s just a lie.

We reported that Hannah took to YouTube and said she dates again. And, she hopes for a man who “got his crap together.” Not interested in “boys,” she intends to play the field a bit. Notably, though, she also said, “But also, right now, it doesn’t really matter. I just want a cute guy to hang out with and take me on a date. It’s expensive out here.” Well, could that extend to a cute guy who’s also not a Christian?

US Weekly reported that Hannah Brown took to her Instagram Stories shared a photo of a mystery man on her Instagram Stories. Unfortunately, his head was completely covered with a big emoji. And, that frustrates Bachelor Nation fans who rally want to know if she found someone to love at last. Some people still hold out for and Tyler Cameron. But, they both deny they’re anything more than friends.

On January 4, Hannah Brown posted up some photos of herself with Matt James, the current Bachelor lead. In the comments section, a rather interesting conversation arose about who she might be dating. Now, it’s not likely the fan who talked about it deliberately lied. Apparently, fans read something on a “spoiler site” about it. And, it seems they follow the person she allegedly dates.

@tashamm79 claimed, “she has a boyfriend she’s been hiding for at least a month.” Naturally, that immediately got some attention. Then, fans asked who it is. However, they became alarmed when the conversation continued. Someone wrote, ” One of the Spoiler pages said the guy [Hannah Brown] is dating wants to abolish all religion and doesn’t believe in God 😮.”

ABC fans don’t believe it, so where did the rumor come from? Here’s what some of them said:

Meanwhile, others asked which spoiler page they talked about. But, it’s not clear. Someone said, “they were together in Nashville he posted the studio and hotel. He has cryptically been posting about her too. It’s true. Look for the 💙💙💙💙.”

Another comment that came in noted, “Stanning_Steve has screenshots and storied his blog that he quickly deleted I guess so Hannah wouldn’t see about his non believing status.” Later it got argued, “well it was on his personal blog that he wrote himself so. Glad she was able to get him to change.”

And another follower of Hannah Brown speculated, “that creepy guy? He’s 34 and does nothing but post sunset pictures and cultish bible quotes.”

Well, we hunted around but can’t find anyone blogging under the name of Stanning_Steve. There is someone with that name on Instagram. But, with only a few followers and few posts, the private account looks unpromising. Clearly, if this person really wanted to abolish religion, he may have become religious now. But one thing is certain, it’s probably best to take it all with a pinch of social media salt.