Adam Busby took to his Instagram Stories to announce his decision to rush his daughter Riley to the emergency room. Adam kicked off his string of video clips revealing they had a little “uh-oh” at home. This was when Riley Busby emerged from the back seat. After walking into the frame of the video, she announces they are at the emergency room.

Adam Busby and Riley explain the trip to the emergency room.

The OutDaughtered dad proceeds to ask Riley to explain why they were at the emergency room. And, she does. But, she’s talking in such a fast and soft voice it is nearly impossible to explain what she is saying. Adam, however, assures everyone there is nothing to be concerned about. He explained Riley tends to speak fast when she is nervous.

Adam, then, decides to summarize what Riley just said. After all, he was pretty sure no one understood her. Turns out, Riley and her sisters were doing a little dancing. At one point in time, it sounds like she was dancing on the floor. Unfortunately, she did not realize the bathroom floor was a little wet. She ended up slipping and falling.

Now, it wasn’t clear how she fell or what exactly she hit her head on. But, Adam explained she had a small gash on the back of her head. And, he was not sure if this was the kind of injury that requires some stitches. He continues to explain they just want to be extra cautious because it is a head injury.

Riley, however, cut daddy off while he was explaining the desire to be extra cautious. She added she thought they would put a new Band-Aids on her head that was different from the Band-Aids they have at home.

Now, Adam and Riley explain the trip to the hospital from the vehicle they drove there in. But, then he starts exploding videos from inside the emergency room. The background and children’s toys in the waiting room suggest they went to a children’s hospital.

While sitting in the waiting room, Adam Busby asks Riley if she is nervous. Does she know what they are going to do? She doesn’t seem too interested in talking. Likewise, she makes it clear she is nervous. Now, Adam does what he can to reassure his daughter. He notes there is nothing for her to be nervous about. And, that everything will be fine. 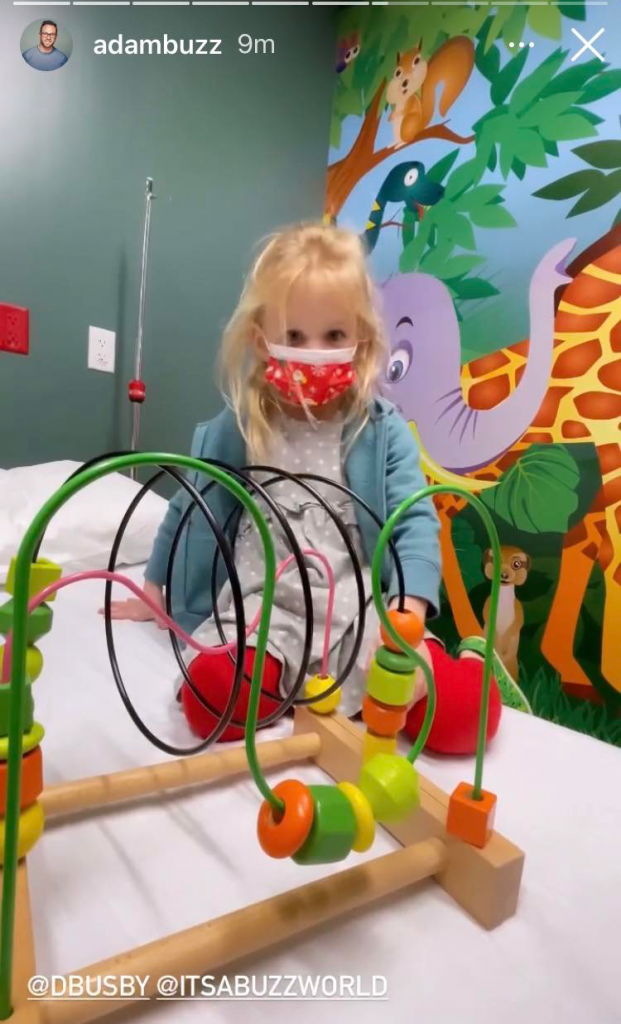 The video clips, then, feature Adam and Riley in the exam room waiting to speak to the doctor. We see Riley interacting with the various animals on the wall. She compares herself to them in terms of height. Then, she jokes that the lion on the wall bit her thumb off.

They’ve been at the hospital for nearly an hour now.

It was roughly an hour ago when Adam took to Instagram from the parking lot of the emergency room to reveal the incident. We assume they headed inside after recording the short video. Likewise, it was about 35 minutes ago that Adam posted a video clip of them in the exam room. We can assume he stopped uploading videos because they were seeing a doctor.

At this time, we are still waiting for an update on if she needs stitches. She, however, seemed to be doing alright! Likewise, it didn’t look like Riley Busby was in any pain. Still, good on daddy for being cautious and taking her to the hospital.

‘General Hospital’ Spoilers: Another Recast Shakeup First Spencer Now Avery?
Todd Chrisley ‘Not Afraid Of Lawsuits’ Amid Being Sued For Slander
Fans Think Nathan Bates & Esther Keyes Have A Secret: See Video
YUCK!! What Has Savannah Chrisley Done To Her Face?!
See Amy Roloff Getting Down At Audrey’s Birthday Party