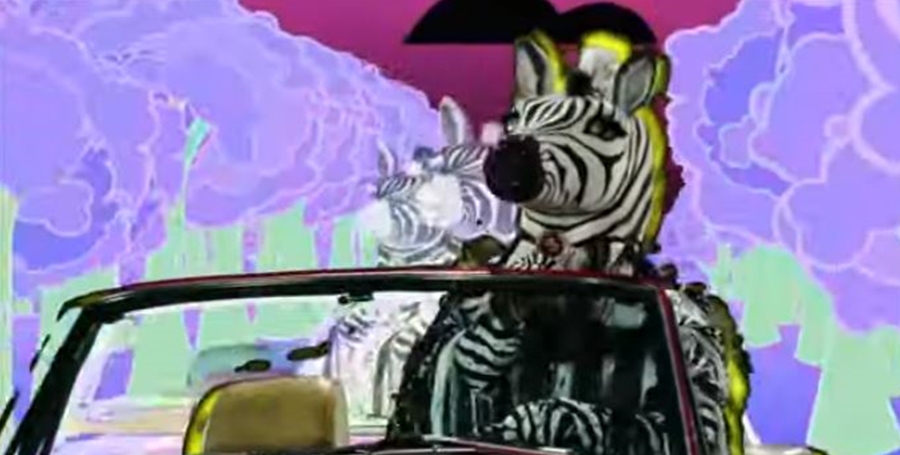 The Masked Dancer already revealed some stunning talent. Fans already took their guesses on Hammerhead Shark and Tulip and more. Now, Fox fans rack their brains and try and figure out who Zebra is. Some rather good guesses emerged. And, some wildly hopeful ones as well. Plenty of ideas rolled in on social media on January 6.

The Masked Dancer – who is Zebra?

We reported that many fans felt that Tulip’s way too easy. And the general feeling is that the pink and green flower is probably Mackenzie Ziegler. That came because everyone knew that she danced on Dance Moms. Plus, she always wanted to tap dance. Now, it looks like Zebra might also have some professional dancing training. Meanwhile. Hammerhead Shark brought a bit more difficulty. Many fans thought he might be a swimmer and others thought he might be an actor or wrestler.

Like Hammerhead Shark, Zebra might not be so easy. Gold Derby reported that Zebra might be a pro dancer. “Paula Abdul praised his ‘superb’ costume while Brian Austin Green praised his ‘fancy footwork’ and Ken Jeong speculated that he must be a ‘trained dancer.'” Before Zebra appeared, one clue came out that suggested Zebra’s favorite holiday tunes is Feliz Navidad, which is “Merry Christmas” in Spanish. And The Masked Dancer fans already started guessing.

Gold Derby speculated that Zebra might be Mario Lopez. After all, Mario feature on Dancing With the Stars before and came in third. The outlet also noted, “Lopez just starred in the Lifetime Christmas movie, ‘Feliz NaviDAD,’ which was directed by his pal Melissa Joan Hart.”

Meanwhile, on Twitter, many fans disagree with that choice for Zebra in The Masked Dancer. Here’s what a few people suggested:

Other guesses for Zebra on The Masked Dancer included Jose Canseco

Many other guesses poured in and included Jose Canseco and Johnny Weir. People also suggested Kevin Richardson. A lot of them though, aimed at Ricky Martin. And that seems to be the most common name that comes up over and over. Mind you, one thing that stumps people is that Ricky Martin might just be too tall to be Zebra. So, other people think Zebra on The Masked Dancer might actually be Howie.

The Zebra votes are in! @ashleytisdale agreed with @withBAGpod ‘s choice with @ricky_martin ! Do you agree or disagree?! #TheMaskedDancer pic.twitter.com/tZ5qbGirmh

Who do you think hides behind the Zebra costume? Sound off in the comments below.

Shirtless Bennett Jordan Offers Delicious Eye Candy And Banana Bread
Audrey Roloff Has Something To Say About The Covid-19 Vaccine
What Has ’90 Day Fiance’ Alum Deavan Clegg Done To Herself That She Looks Unrecognizable?
What Podcast Is Michelle Duggar A Guest On?
Danielle Busby Having A Boy? ‘OutDaughtered’ Mama Spills Her Thoughts