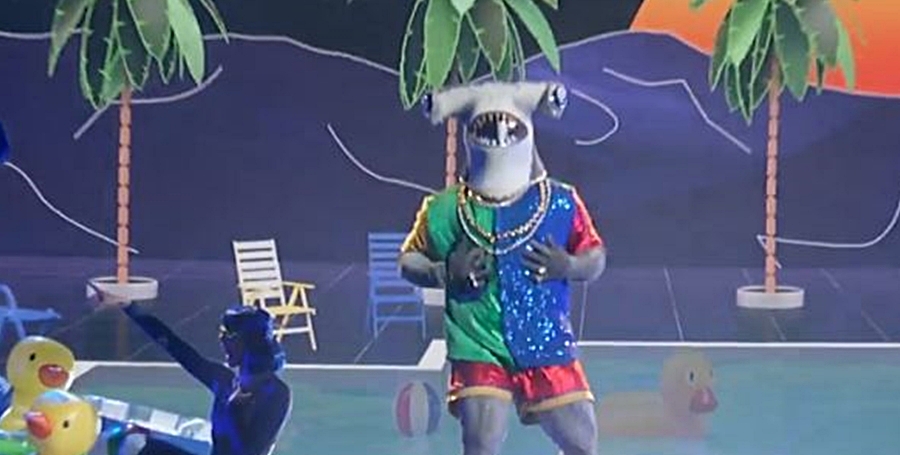 The Masked Dancer contestant the Hammerhead Shark might be a swimmer, fans think. Mind you, could it possibly be that easy? After all, unlike The Masked Singer, judging people by their moves and costumes seems a bit harder than hearing people sing. Still, Fox said that some clues come from the outfits they wear. So a swimmer might be a possibility. In the premiere, a lot of folks started guessing already.

The Masked Dancer Hammerhead Shark might be a swimmer

We reported that when the show was announced, Fox promised that guessing won’t be very easy. Okay, the show comes with clues. But, it seems that keeping fans guessing is a huge part of the fun. Ken Jeong returns as one of the judges and Craig Robinson hosts it over the next eight weeks or so. With 10 celebrities behind those masks, lots of entertainment awaits fans of the show.

Several teasers came out about Hammerhead Shark ahead of the premiere. And fans discussed it for some time already. One interesting theory that isn’t an Olympian swimmer includes Vinny Guadagnino from Jersey Shore on MTV. That sounds like a good guess as one fan on Instagram mentioned the shore in the background. And the Hammerhead’s got a similar build to Vinny. But many people think it’s a swimmer on The Masked Dancer.

Hammerhead Shark could be Dwayne ‘The Rock’ Johnson

On Instagram, a lot of people suspected the dancer might be Dwayne “The Rock” Johnson. Well, Goodhousekeeping noted that the clues could point to that. These are:

Other The Masked Dancer fans floated the idea of John Cena The WWE wrestler. After all, about three years ago, he mentioned that “he idolized M.C. Hammer.”

Over on Instagram, the fact the shark swims make people think of Ryan Lochte. Or, Simone Biles. Then one fan commented, “I got Logan or Jake Paul vibes, maybe Bryce Hall??” Actually, a lot of people thought those were possibilities. Meanwhile, on Twitter, guesses ranged from Kevin Hart, Sean Penn, and Michael Phelps. Other ideas also came in.

One fan of The Masked Dancer commented, ” the hammerhead shark is definitely Andy Samberg.” And another one suggested, “hammerhead is mikey day.”

Then this guess came in: “So far my guesses #hammerhead is Mark Cuban or Daymond John.”

As you can see, many opinions suggest different people. But so far, perhaps The Rock or Vinny sounds the most likely rather than a swimmer. What do you think? Sound off your guesses in the comments below.