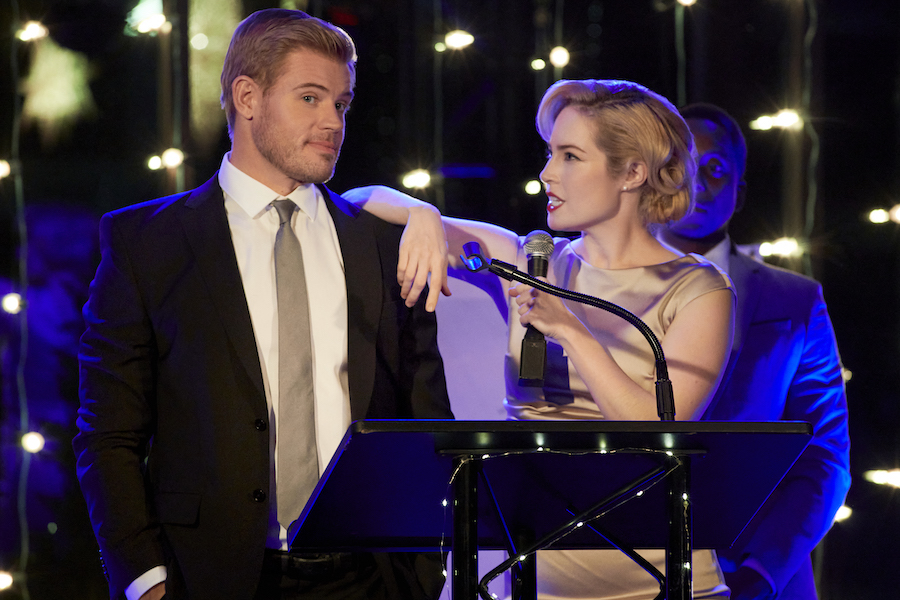 What Is Hallmark’s Two For The Win About?

What is Hallmark’s new winter skiing movie, Two For The Win all about? According to the press release, Justin O’Neill (Donovan) is a world champion ski racer. But, he crashed in Austria and really needs a serious comeback. This is really a make or break moment. Justin is headed towards the end of his career. Does he have another comeback in him?

However, he needs to prep for the Annual Winter Classic. But, he has no coach. He heads home and literally crashes by his old friend, Kayla Green (Sullivan). Now a local ski instructor, they trained together as kids. When he headed off for international fame, she stayed home, but continued skiing. She has talent and she knows him. Maybe she can now be his coach?

Although the pair grow close again, Justin is at a crossroads. Does he return to his old life, or does he reinvent his life back home? His skiing life has become familiar and comfortable. But, it may not be what he still wants to do. Back home, he has Kayla and he can also rebuild his relationship with his folks. What is Justin’s winning movie?

Does The Two For The Win Cast Actually Ski?

Yes, Trevor Donovan does ski. On the Hallmark On Location video, Trevor via Twitter shared that he grew up ski racing. On the other hand, Charlotte Sullivan has not skied since 1997. So, it will be fun to see how much real skiing Two For The Win will feature. In addition, they are both quirky characters, and they “mirror” each other, which will make this quite a fun romcom!

Along with the video, Trevor wrote, “Express gratitude. Read uplifting stuff. Ditch the trash. You wouldn’t eat garbage—why put it in your head? Try to understand a point of view that is different from your own. #HappyNewYear2021 ( #TwoForTheWin air January 16th mark ur calendar & set ur DVR. )”

In addition, in the movie there is line dancing. That is something that fans should greatly enjoy. But, Sullivan says that you will need to watch to see how they do! “Some are better than others.”

Moreover, Trevor says that this is the perfect movie for the beginning of the year, as it has a “clean slate.” He added that this is very inspirational. Donovan shared that viewers will watch the movie and think, “This time, I’m gonna start and I’m going to do things right.”

Are you ready for some schussing and line dancing?

Express gratitude. Read uplifting stuff. Ditch the trash. You wouldn’t eat garbage—why put it in your head? Try to understand a point of view that is different from your own. #HappyNewYear2021
( #TwoForTheWin air January 16th mark ur calendar & set ur DVR. ) pic.twitter.com/tJfm8TDN8J

When Can You Watch Hallmark’s Two For The Win?

Moreover, are you ready for a New Year New Movie?

Don’t forget to catch the premier of Hallmark’s Two For The Win, on Saturday, January 16, at 9 p.m. Eastern, on the Hallmark Channel.