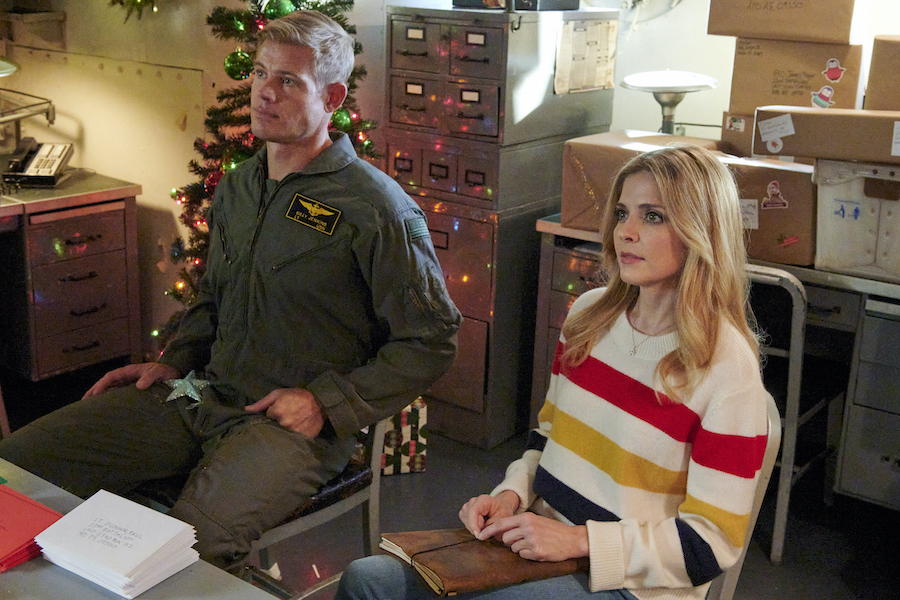 This unique story includes a mystery and a whole lot of romance!

What Is Hallmark’s USS Christmas About?

According to the Hallmark press release, it is Christmastime. Norfolk Register reporter Maddie Johnson (Lilley) is ready to go on a Tiger Cruise! Maddie grew up in a military family, and she has a great deal of family history and respect for the those who serve our country. So, this cruise is very special.

Maddie is attending with her mom, Elizabeth (Niven), and her sis, Lieutenant Amelia Breslan (Stefanie Butler), she runs into Lieutenant Billy Jenkins (Donovan). She had recently met the fighter pilot at a Christmas gala, held for the Navy. Nicknamed “Grinch,” his hair is a bit too long, he has a chip on his shoulder and he only cares to advance his career. He has no time for romances.

On the excursion, Maddie uncovers a bit of a mystery. While in the ship’s archive room, she uncovers an old journal from over 50 years ago. Inside the journal, he writes about falling in love while on a Tiger Cruise.

Soon, Maddie tries to uncover clues to this story. Meanwhile, she makes peace with her own fears about the military. Can she let her heart fall for a man in a uniform?

According to Military, Hallmark’s USS Christmas was filmed onboard the aircraft carrier in Norfolk, Virginia. Both active-duty Navy and veterans were extras for the movie.

This movie filming was such a big deal that the What The Hallmark podcasters, Panda, Grumpy Dan and Bran are extras in this movie. You may want to look for them!

When Can You Watch USS Christmas?

Hallmark Movies & Mysteries is the home of Miracles of Christmas. These movies have more emotions, and all the feels. Sister station, the Hallmark Channel, airs lighthearted movies.

Be sure to catch the latest Hallmark Channel Christmas movie premiere at 8 p.m. Eastern. Then switch over to the sister station to watch USS Christmas. Don’t forget to check out Twitter on premiere night. Hallmark and many of the stars tweet during premiere night.