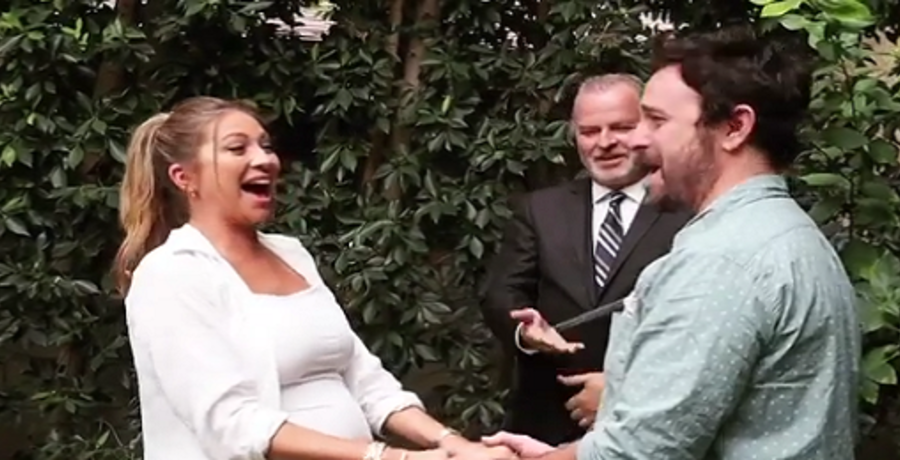 Stassi Schroeder joked that Beau Clark is the reason why their daughter isn’t born yet. Recently, the Vanderpump Rules alum has been counting down the days. The couple’s baby girl is due any day now.

Over the weekend, the former Bravo star took to her Instagram Stories. She shared a message from her friend Real Housewives of Beverly Hills alum Teddi Mellencamp. Teddi shared a photo of her husband, Edwin Arroyave, watching the L.A. Rams vs. Arizona Cardinals game. The accountability coach asked Stassi Schroeder if Beau acted as if he was playing on the field as well.

“Yes & I’m convinced this game is why I haven’t given birth yet,” Stassi responded. “Beau willed her to stay in until after today.”

Beau loves watching the Rams. The TV agent did not want to miss Sunday’s big game. He also took to his respective Instagram Stories. Beau responded to Teddi’s question with the joke: “I’m also coaching.” Then, he followed up with a video of his friend Edwin lifting his son Cruz and hugging him after the NFL game.

Beau was so happy that the Rams won. And Edwin’s video made him smile. “This is what I can’t wait for!” he wrote, adding the football and baby face emojis to his caption. Beau and Stassi have referred to their unborn daughter as “Baby H.” It turns out that she will become a Rams fan in the making. Beau also shared footage of his daughter’s clothing rack, which features a tiny Rams jersey.

When is Stassi Schroeder due?

The reality star could be having an overdue pregnancy. Stassi Schroeder has tried everything to deliver her child as soon as possible. Last week, she tried several methods, including bouncing on a ball, drinking raspberry leaf tea, seducing her husband, and simply walking around. All of these methods are rumors to induce labor.

On her latest Instagram Story, Stassi had a bottle of castor oil on her kitchen counter. Castor oil causes uterine contractions. Stassi’s bottle contained a note with instructions that read she should drink it “after 5 p.m.” on Sunday. It still would have been late enough for the Rams football game to end.

This also comes after Stassi addressed her “hard” and “painful” pregnancy. In an emotional Instagram Story, the 32-year-old gave her fans a glimpse at the less joyous side of expecting a child. The Next Level Basic author revealed that she felt uncomfortable leading up to the weeks of her birth.

“Real talk – pregnancy is hard. I don’t feel like myself. I don’t feel attractive,” Stassi wrote on her selfie. “… I’m uncomfortable and it’s painful to move around. And my emotions are so all over the place, I feel insane.”

Despite these challenges, Stassi is looking forward to the day when her daughter arrives. So far, the television personality has been quiet on social media since Sunday afternoon. Check back with TV Shows Ace for the latest updates on Stassi and Beau’s baby girl.