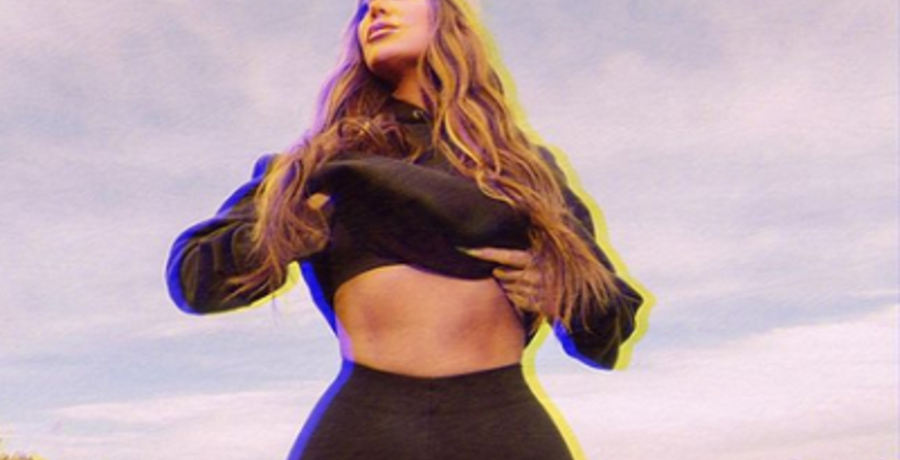 Khloe Kardashian is showing off the goods. Her Revenge Body is on display. The 36-year-old posed topless in a new photoshoot. She left little to the imagination when she strategically covered up her breasts and showed off some major cleavage.

The stunning photo received over 2.3 million likes and over 12,000 comments. Khloe nearly broke the internet when she brought the “girls” out to play. Not only did she show off her incredible body, but she also flaunted her weight loss. In the steamy Instagram photo, Khloe wore nothing but her Good American jeans.

Nothing comes between this KUWTK star and her jeans

Khloe Kardashian didn’t have a top for this look. But it’s not a problem. She covered up her breasts with both of her arms. Her skintight jeans looked as if they were painted on her body. The reality star took it to the next level when she kept the focus on her breasts instead of her jeans.

The Instagram influencer didn’t need a caption for this post. It speaks for itself. All Khloe wrote was a white heart emoji in the caption. She sent her followers into a meltdown over her hot new photo. Khloe even pulled back her dark blonde locks to make sure that her cleavage was the center of attention.

The post caused a lot of reaction. Here are just some of the comments on the steamy photo. Khloe even took the time to respond to most of the kind comments from her fans.

But that’s not the only steamy photo Khloe shared. TV Shows Ace previously reported the photo of her in just her underwear. In the festive photo, Khloe posed with various Louis Vuitton bags around her. Just days after, Khloe posted the following photo of herself wearing just a tan blazer with white thigh-high boots. The sexy shoes also featured snakeskin print.

Before Christmas, Khloe Kardashian was spotted with a ring on that finger. The diamond ring is so massive, that fans wondered if she was engaged to baby daddy, Tristan Thompson. Per People, the couple is not engaged. But the NBA star did buy her a diamond ring.

Khloe is not the only one who’s dealing with the gossip. Her oldest sister, Kourtney Kardashian, caused speculation when she posted a series of bikini photos on Instagram. Some of her followers thought she looked pregnant in the snapshots. Kourtney followed up with another bikini photo, but she kept her stomach covered.

It appears that both bikini shots are throwback photos from previous trips. What do you think of Khloe’s topless photo? Sound off below.

Does Lisa Rinna Regret How She Treated Denise Richards?
Lori Loughlin, Husband Splash Out On Multi-Million Dollar Abode
‘GH’ Spoilers: Sonny Is Back And Furious, Limo Explodes Shakes Up PC
Former ‘Unexpected’ Star Lexus Scheller Is A Mom Again
Jessica Batten Of ‘Love Is Blind’ Gets Happily Ever After