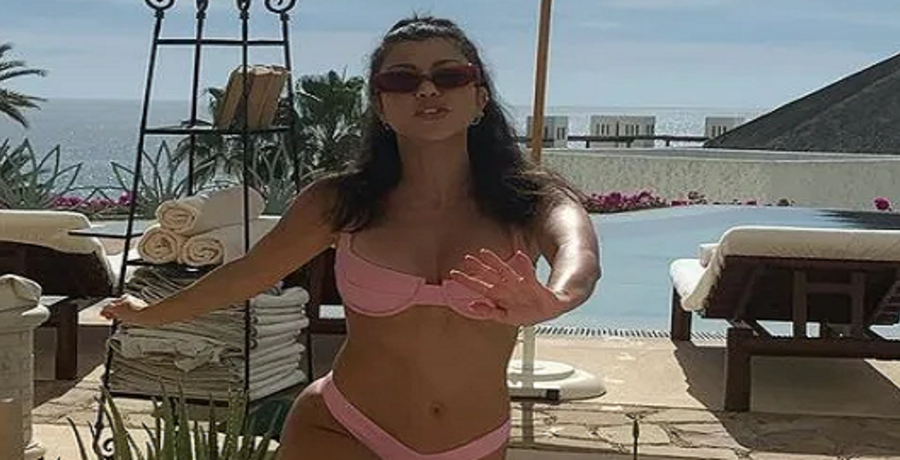 Kourtney Kardashian posted a series of bikini photos on Instagram. And some of her followers think she’s pregnant. It’s an insult considering that the 41-year-old looks incredible in the photos. Kourtney continues to prove that age is nothing but a number.

The Keeping Up With the Kardashians star excited her 105 million followers. She shared bikini photos from her family vacation in Cabo San Lucas, Mexico. Just days ago, Kourtney hosted an intimate Christmas Eve with the rest of the Kardashian-Jenner crew. Now, the reality star has fans wondering if she’s pregnant.

KUWTK star gets trolled by fans

On Sunday, December 27, Kourtney Kardashian took to Instagram to post a series of sizzling bikini photos. She wore a tiny pink bikini, which she accessorized with dark sunglasses.

Kourtney obviously looks great. As hardcore fans know, she’s all about health and fitness and it shows. Her bikini showed off her cleavage and rock-hard abs. But some followers thought she looked pregnant.

“Does anyone else see a baby bump or am I crazy?” one follower wrote.

Other fans admitted that they “hoped” she was pregnant. Some fans are also holding out hope that she will get back together with her ex-boyfriend and baby daddy, Scott Disick. Keep in mind that this photo is a throwback to a previous family vacation. Some noted that her hair is a different length than it currently is.

For some reason, this particular post has fans confused. They can’t keep up with the Kardashians and their travels. But it’s likely that they throw in some throwback photos for good measure. Some are convinced that Kourtney Kardashian is pregnant.

But Kourtney hasn’t responded to the trolls. It’s obvious that she’s not pregnant. And she hasn’t made it clear whether she wants more children. She seems content with the family that she has.

So, it could be that this is an old photo, and Kourtney is not having another child. And according to her previous Instagram post, she may have enjoyed a cocktail at the Kardashian Christmas Eve celebration. Kourtney already made headlines this week after she shared an article from her lifestyle website, Poosh, about being “autosexual.”

Kourtney Kardashian posts about being 'autosexual' and explains it's where 'you're turned on by yourself' https://t.co/pTRu58bGaf

“Are you autosexual?” it asks. “The short answer is yes, most likely. In fact, we are all, at least a little.”

The article describes “autosexual” as “a trait wherein one is turned on by engaging in their own eroticism.” While it’s common among women, it’s not just about them. The article describes autosexual behaviors like enjoying lingerie and putting on makeup. Of course, critics have called out the article for being misogynistic.

Some would argue that women have more going for themselves than their sexuality. Kourtney launched Poosh in 2019 as a “modern guide to living your best life,” that’s been compared to Gwyneth Paltrow’s site Goop. Like Goop, it has its share of controversial advice.