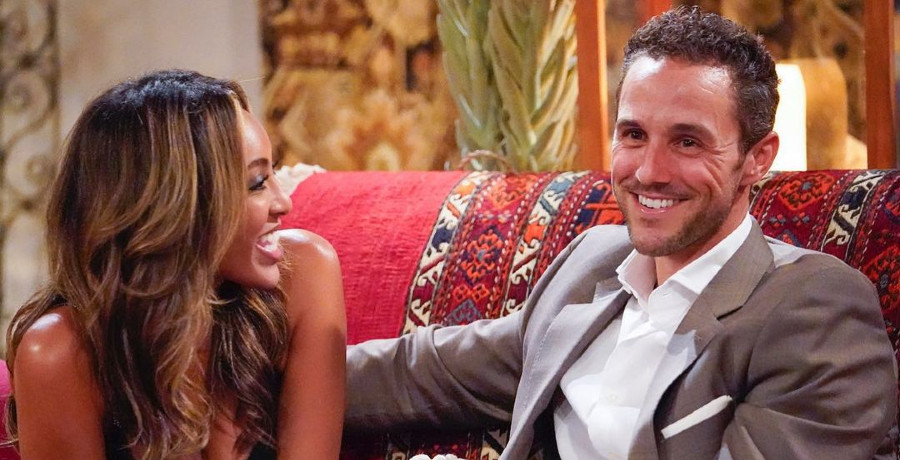 The Bachelorette star Tayshia Adams is about to get her first taste of Christmas in NYC. Earlier this week, viewers watched as she got engaged to Zac Clark on the popular ABC dating show. Within days, the two were planning their first trip as a couple. And it’s a big one. The West Coast girl is spending Christmas with Zac’s family in NYC!

But with the city shut down, what will Christmas in NYC look like in 2020?

Tayshia Adams and Zac Clark Head to ‘The Big Apple’

In the season finale, she did find love with Zac Clark. Filming for the show ended months ago, so the two had to hide their engagement. Tayshia accidentally almost spilled the secret on her Instagram.

On Christmas Eve, Tayshia Adams and Zac Clark shared their holiday plans on social media. On their respective Instagrams, the two revealed that they are going to New York City to spend the holidays with his family. Tayshia and her family are based in California.

Before embarking on the cross-country journey, Tayshia took to her IG Stories to ask for tips on what she should pack. Zac Clark later shared a snapshot of the two on the plane. And yes, they are wearing masks. Which they better get used to because New York state has a strict mask policy.

In fact, New York has some of the strictest guidelines for preventing the spread of coronavirus. And The Bachelorette couple may have already broken one of them.

When the coronavirus pandemic started earlier this year, New York City was the epicenter. Governor Andrew Cuomo quickly enforced a mask mandate, declaring everyone must wear masks in places where social distancing isn’t possible, such as outside in high-traffic areas and in stores.

Additionally, restaurants, gyms, bars, etc., were shuttered for months to prevent the spread of the virus. In June, counties in Upstate New York slowly began to reopen. However, New York City wasn’t able to reopen until July. The number of coronavirus cases was going down. But in recent months, the numbers across the state started to spike.

In response, indoor dining in NYC was suspended again earlier this month. Additionally, gatherings have a limit of 10 people or fewer. And the mask mandate is still in effect.

Governor Cuomo also has a strict quarantine policy in place for out-of-state travelers.  Originally, anyone flying in from out-of-state must quarantine for 14-days before venturing out among other people.

However, the updated policy allows for travelers with a negative COVID test to quarantine for just 3 days upon arrival.

In fact, stations are set up at the airports throughout the state, where arriving passengers leave their contact info and sign an agreement to quarantine. Anyone caught breaking the quarantine guideline is liable for a fine of thousands of dollars.

However, if Tayshia and Zac are spending Christmas with his family, they clearly plan to ignore the NYC guidelines.

Christmas in NYC is usually the busiest time of the year. However, the coronavirus brought quite a few changes. Only a limited number of people are allowed to visit the Christmas tree at Rockefeller Center and must reserve their spot ahead of time. Neither Broadway and Radio City Music Hall are open for shows.

While many fans of The Bachelorette celebrated Tayshia and Zac’s engagement, others questioned their plans to travel to NYC. The couple faced some backlash on social media for traveling during the pandemic. See some of the tweets below.

No one is supposed to be traveling right now…

Have fun but I’m pretty sure it’s all closed down😷 , all the restaurants are closed. That’s my city too ..it’s sad 🙁 stay safe

Please stay home. There is a pandemic.

What do you think about Tayshia and Zac ignoring guidelines from the CDC not to travel right now? Did you travel for Christmas? Let us know in the comments down below. A new season of The Bachelor with Matt James starts Monday, January 4, 2021.

‘AGT’ Klek Entos: Who Is The Man In A Bizarre Mask?!
‘Edens Zero’ Season 1 Netflix Release Date: What To Expect
Kanye West Cuts Off Entire Kardashian Family
‘LPBW’ Jackson Roloff Has Huge Accomplishment, Can’t Wait Until He’s 11
Dr. Now Shares A Key Factor In Reversing Obesity: What Is It?