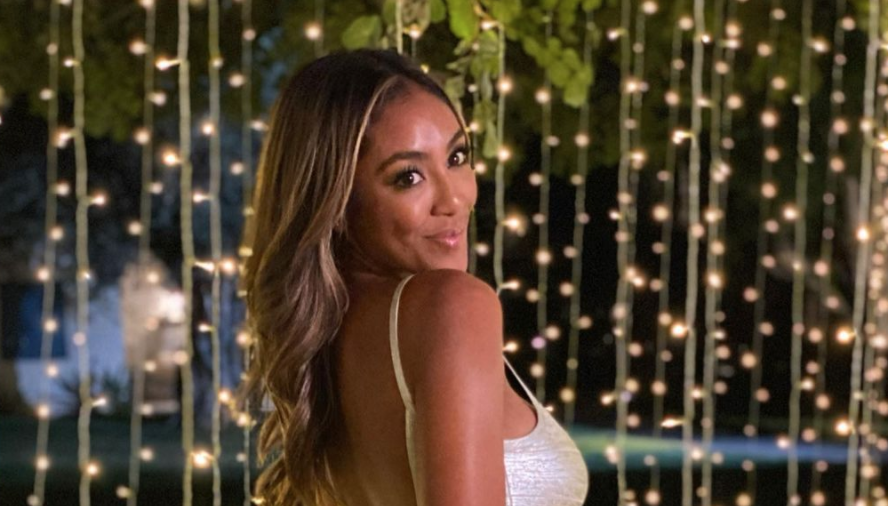 Tayshia Adams is engaged! Of course, it wasn’t all smooth sailing. Apparently, she accidentally almost spoiled the ending to her season. Luckily, it doesn’t seem like anyone caught on!

It’s pretty hard to not spoil the ending of shows these days especially with social media. Turns out, Tayshia almost did it to her own season. Entertainment Tonight says that Tayshia actually posted a story on her Instagram before realizing that she accidentally showed her engagement ring in the photo. That definitely would’ve given away something!

Of course, after posting, Tayshia started freaking out.

“I guess I can come clean now,” Tayshia says before telling the rest of the story about the ring.

She continues talking about the situation: “I actually was freaking out. I was screaming, I was running all throughout the house,” Tayshia reveals. “He was with me, obviously, and it was a panic. But also at the same time, I kind of just played it off and it kind of just went away.”

She played it off pretty well saying doesn’t every girl do that?

“Honestly, who doesn’t drink their coffee in the morning and have a couple diamonds on?” she says. “Doesn’t every girl do that? No?”

Zac and Tayshia are in love

Of course, Zac and Tayshia are engaged now. Apparently, they felt their strong chemistry pretty early on but they were scared of rushing things. Wouldn’t it have been crazy to have another Clare Crawley and Dale Moss situation?

“We felt it pretty early on,” she says about their relationship. “But at the same time, I feel like we were both hesitant to acknowledge it, just because it’s like, ‘Hold on a second, this is happening way too fast. Are we really like, is this real? Is it just the situation?’ And I think it was during his hometown date that we were just like, ‘It’s undeniable. It was just screaming at us at that point.”

Zac joins in saying once they met each other’s family’s they knew it was real.

Honestly, they make such a cute couple. It will be fun to see them get engaged and what else they each do with their futures.

Did you ever notice Tayshia posting her ring from The Bachelorette on her Instagram story? Let us know in the comments. Come back to TV Shows Ace for more news on all of your favorite Bachelor Nation stars.

‘Dancing With The Stars’ Adds Two Pros To The Cast — Let’s Meet Them!
‘Love After Lockup’: Are Kristianna & John Expecting A Baby?
‘Bringing Up Bates’ Star Michaela Keilen Shares Fertility Treatment Update
Anna Duggar’s Due Date: When Is Baby #7 Coming?
‘The Bachelorette’ Alum Bennett Jordan Found New Love, Who Is It?