It sounds as if Justin Bieber wants to following in the footsteps of the Duggar family of TLC’s Counting On. And, how is that exactly? Well, he wants to have as many children as possible. Or, at least as many as his wife Hailey is willing to “push out.”

He shared this piece of information during his recent appearance on an episode of The Ellen DeGeneres Show. If you haven’t seen the interview yet, you can watch it on YouTube. Or, check it out near the bottom of this story.

During his interview with Ellen DeGeneres, they arrived at the topic of children. Ellen (as well as fans of Justin) know well that he loves children. It’s also no secret he’s very good with them. So, some of us can’t help but wonder why he and his beautiful wife haven’t started having them yet. They do want children right?

Justin Bieber quickly owned the fact that he does want children. And, so does his wife. In fact, he wants a lot of children. He, however, recognizes that how many children he has isn’t his decision.

I am going to have as many as Hailey is wishing to push out. I’d love to have myself a little tribe. But, yeah, it’s her body and whatever she wants to do.”

Fans of the singing sensation could be heard swooning in the background as he played the “her body, her choice” card. Both fans and Ellen really loved how much respect Justin seemed to have for his wife and women in general.

Naturally, this conversation went in the direction anyone would have expected it to take. Ellen wanted to know what everyone else wanted to know. Justin wants a whole “little tribe.” And, he knows his wife wants some children too. So, what were they waiting for? Was there something preventing them from having children? Justin continued to explain.

He explained: “There’s not really an issue, but I think Hailey still has some things she wants to accomplish as a woman, and I think … she’s just not ready yet. And that’s OK.” 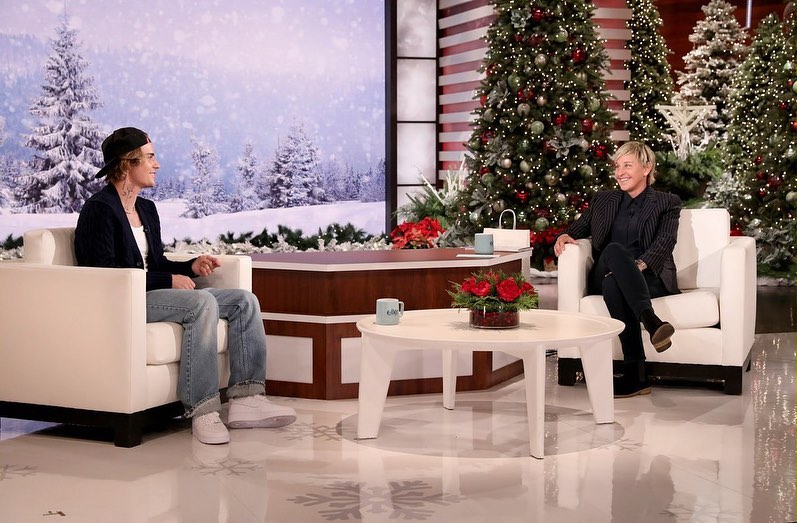 Ellen DeGeneres made it clear that was the type of answer she was hoping for. In that moment, she had a lot of respect for Justin. Based on the comments attached to the YouTube video, so did a lot of other people.

In fact, many credit his beautiful wife Hailey in playing a huge role in helping him grow up.

Speaking to Apple Music’s Zane Lowe, Justin also opened up about having children back in February of this year. He revealed he and his wife were just enjoying the married life. But, it sounds like a little Bieber tribe will happen when the time his right.

I want to enjoy being married for a little bit, go on tour, be married, enjoy traveling with just us, build more of our relationship. I think that it’s definitely the next step, for sure.”

Now, we also know Hailey Bieber is just 24 years old. And, she just turned 24 as she celebrated her birthday last month. Justin is just a few years older at 26. And, he’ll be turning 27 in March. So, they are still fairly young and have plenty of time to have some children.

It’s worth noting Michelle Duggar was just a few years younger than Hailey is now when she had her first child. Michelle and Jim Bob, then, proceeded to have children for the next 20 years. So, there’s still plenty of time on Hailey’s clock.

The next Michelle and Jim Bob Duggar?

We know Michelle and Jim Bob Duggar of TLC’s Counting On rose to fame largely thanks to being the parents of 19 children. The reality TV stars were adverse to any type of birth control. Felt it was in God’s hands to decide how many children they would have. We know they have 19 children. And, Michelle recently took to Instagram to gush about how they now have 19 grandchildren as well. Is Justin Bieber and his wife Hailey headed down the same path?

So, does singing sensation Justin Bieber and his wife Hailey have what it takes to be the next Michelle and Jim Bob Duggar? Share your thoughts on a bunch of little Biebers running around in the comments!