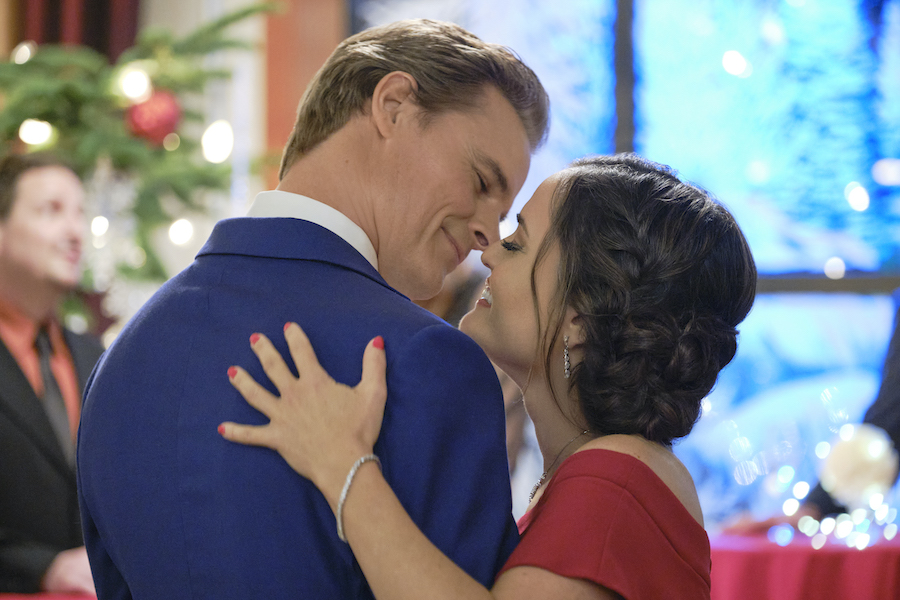 Hallmark’s upcoming movie, Christmas She Wrote, is a classic holiday romance filled with plenty of classic Christmas activities. Starring Danica McKellar (A Crown For Christmas) and Dylan Neal (Bold and The Beautiful), this is a Countdown To Christmas filled with romance.

What Is Christmas She Wrote About?

According to the Hallmark press release, Kayleigh’s (McKellar) “Your Best Self” advice column has been axed. Even thought it is Christmastime, her new editor-in-chief, Tripp (Neal) needs to make cuts and her popular column is kaput. He tells her he is “retiring” her column.

Kayleigh decides to leave New York for her small hometown, Pineberry. She figures that there, she can regroup with her family, and figure out her next step. Meanwhile, Tripp’s decision has caused a lot of controversy. Kayleigh’s loyal readers are furious. Worse yet, Tripp may lose his own job over his hasty decision. He needs to bring Kayleigh back to paper ASAP.

So, Tripp heads to Pineberry to woo her back. But, the resourceful writer already has a new job. She is writing a daily column with the local Pineberry paper. Her focus is on being “your best Christmas self.” Kayleigh has zero intention of returning to the paper and to New York City. So, Tripp extends his visit, hoping that he can sway her to return.

What winds up happening is that Tripp begins to transform. With each Christmas activity they enjoy together, he has become lighter and more fun. He finds out what small town life is like, and he is enjoying himself. Most of all, Kayleigh looks at him with fresh eyes. There is definitely an attraction.

In true Hallmark fashion, Kayleigh’s ex, (Dan Payne,  MatchMaker Mysteries: A Fatal Romance), returns and wants her back. Will Kayleigh choose to be with the right person for her best self?

Although Hallmark’s Christmas She Wrote sounds like it would be a Jessica Fletcher holiday murder mystery, it is actually a romance. Nonetheless, both Danica and Dylan star in their own Hallmark Movies & Mysteries signature series.

As for Dylan Neal, he, along with Brooke Burns (The Most Wonderful Time Of The Year), star in the Gourmet Detective Mysteries. Although they are based on the Peter King books, Neal, along with his wife, Becky Southwell, write the scripts for this popular cosy mystery series.

When Can You Watch Hallmark’s Christmas She Wrote?

On premiere night, make sure you live tweet along with Hallmark, the stars of the movie and with other Christmas movie fans. Follow the hashtags and ask questions, or learn some fun BTS facts.

Be sure to catch the premiere of Christmas She Wrote, on Sunday, December 6, at 8 p.m. Eastern.