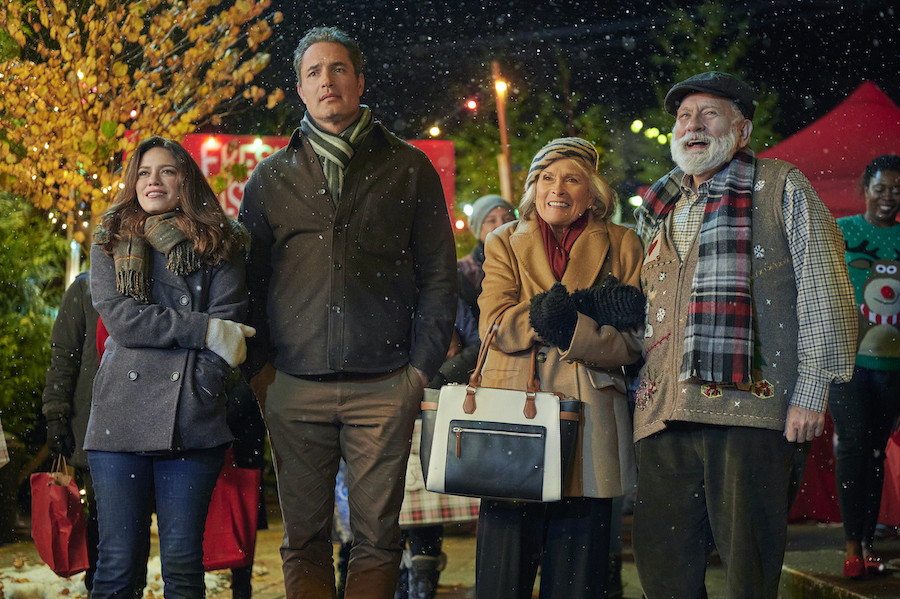 Ready for a Christmas rom-com? Hallmark’s Five Star Christmas promises as many laughs as feels. Starring Bethany Joy Lenz (Just My Type) and Victor Webster (Hearts Of Winter), this is a Christmas movie that will make you smile all the way through the holidays.

What Is Hallmark’s Five Star Christmas About?

Wouldn’t it be nice to start a cozy B&B? According to the Hallmark press release, well Lucy Ralston’s (Lenz) dad Walter (Jay Brazeau) seems to think so. He has converted their family home into a B&B, and already a travel writer is preparing to check it out.

As the family reels from the shocking B&B news, they now have to help dad fix up the place. They still need business. But, things could soon change. Travel writer Bea Turner is headed over to check out the place. So, the rest of the family pretends to be guests, to make the inn appear successful.

Bring in another paying guest, Jake (Webster), to the inn. This is great news. Moreover, there are a lot of sparks between Jake and Lucy. Lucy feels guilty about lying to Jake. But, it turns out that Jake has a pretty big secret himself.

Expect a lot of laughs, love and all the feels you expect in a romantic comedy.

This new Hallmark Christmas movie is a bit a departure from the “traditional romance” movies that fans normally expect. This is a real rom-com. That means romantic-comedy. Think When Harry Met Sally, Four Weddings And A Funeral, or Sleepless In Seattle. Expect to laugh, as we watch Lucy and Jake get romantically entangled.

Hallmark’s Five Star Christmas director, Christie Will Wolf, shared on Instagram how much fun it was to film this movie. “A little snap from behind the scenes on our Romantic Comedy “Five Star Christmas.” As you can see, my cast is super serious 😂 I think audiences are going to absolutely love this film. As a filmmaker, is been exciting to direct an old school real Rom-Com, rather than the traditional Romance that I often make for television. This one feels different 🙂 Movie will premiere 8pm Nov 26th on Hallmark – US Thanksgiving Day! ”

This was posted back in early October. Since then, they moved the premiere date of Five Star Christmas to Friday, November 27. More times and details below.

Director Christie Will Wolff shared this picture from filming, talking about how much fun they were having on set.https://t.co/yVM4hAZwYo

When Can You Watch Hallmark’s Five Star Christmas?

Moreover, be sure to check Twitter while the movie premieres. Hallmark and some oft the stars of the Five Star Christmas will be on, talking about the movie. They certainly want your opinion. Best of all, you get to interact with your favorite Hallmark stars.