The longevity of a television drama is contingent on the quality of the characters. A show can have an intriguing story, lots of action, or comedy but if an audience doesn’t connect with the characters then don’t expect to have many seasons.

Chicago Fire happens to be one of those unique dramas that has a bit of everything, and after nine seasons with minimal actor turn over the quality of characters this show produces is amazing. Firehouse 51 is a group of people that are really a family at heart. So even with only two episodes out Season 9 has laid the groundwork for some really captivating storyline opportunities this year.

Train Them Up Right on Chicago Fire

An essential part of firehouse life is training new candidates; that has been a common theme from the very beginning. Every few seasons we are introduced to a new character that the firefighters have to show the ropes. Season 8 had focused on these interactions especially. We got to see Casey taking the new candidate Gallo under his wing while Herrmann continued to be a mentor to his candidate Ritter.

One unlikely combination last season was Chief Boden taking Stella Kidd under his wing and affording her opportunities to grow and really make a difference in the department. I loved this pairing and after Boden encouraged Kidd to sign up for the Lieutenant’s test in Episode 1, I want to see more of these two.

One thing that was lacking in the show was female leadership. Last season there were frequent reminders that female officers and leaders in the CFD are few and far between. Stella stepped up in this area and created an amazing program called Girls on Fire, creating the opportunity for the women to step forward as mentors. This storyline is being carried into Season 9 and Kidd takes one particular recruit, Kylie Estevez, under her wing.

One final mentor/trainee duo we have this season will be Brett and her new partner Mackey. This is a great addition to Season 9 because it highlights how much Brett has grown. Kara Killmer talked about this saying, “You get to see her [Brett] have a stronger leadership [role], so you’re really getting to see her step into her own in that way.” Having women be leaders and help grow other women is something I am here for this season. 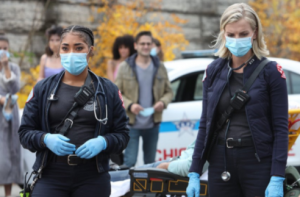 Sprinkle in the Drama

What would Firehouse 51 be without the couples throwing heart eyes and sexual tension around for everyone to enjoy? Well, it wouldn’t be as fun, that’s for sure. Chicago Fire has established several core couples that we have come to rely on. The older firefighters seem to have it figured out (Cindy and Herrmann have been creating relationship goals since Season 1) while the younger ones tend to stumble around. But one couple that has truly hit their stride and might be heading for the next steps is Stella and Severide. Creator Derek Haas said the couple is “looking to the future”, so seeing this couple continue to grow will be a nice balance.

Balance to what you may ask. Well, the answer is: whatever will happen between Casey and Brett this season. Episode 2 finally answered the will-they-won’t-they question fans have been asking for two years. The two shared a kiss, but things seemed to stop before they even really started. The last two seasons have been about Brett and Casey building a friendship and the attraction slowly growing between them. But now they are faced with serious questions that will determine if they will start a relationship. The pitfalls and landmines this potential couple will have to navigate will likely keep us guessing for several episodes this season. 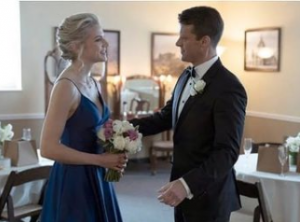 But on a lighter note, Mackey and Gallo have struck up a flirtation that will hopefully give fans some cute moments of reprieve from some of the heavier moments to come. But like all Chicago fans, I am willing to suffer through the torture that Derek Haas dishes out because these couples are worth it.

It All Boils Down to Family

All of these interactions in Chicago Fire really come down to family. Everyone in the firehouse is a member of the family, which makes the advice, love, and comedy all the more meaningful. I have loved watching the last eight seasons because of how much these characters care for and take care of each other. This season I am particularly looking forward to a few specific relationships.

The first is Joe Cruz and Mackey. These two grew up together and in Episode 2 we learn why Joe is so protective of her. He promised Mackey’s older brother that he would take care of her. We haven’t seen a true older-brother/younger-sister relationship in the house yet. These two could really offer a wonderful tit-for-tat interplay as well as genuine moments like we saw last episode.

Along these same lines, I would like to see more Stella/Brett moments this season. These two have been friends for years and they have had their special moments. However, now that Foster is gone, they need more girl time. I would love to see this relationship become more like sisters than just best friends.

But the couple I am most excited to see is the comedic duo that is Gallo and Ritter. These two have been such a breath of fresh air to the show. They are the scrappy little brothers we all wish we had. Gallo is the one that is going to get them into shenanigans. Ritter on the other hand is going to volunteer them for things. The few moments we got of these two together in Season 8 only set up their friendship. Now I am expecting their antics to be epic this season. Kyri and Rosende are now series regulars; which means more screen time for my boys!

So Ready for More Chicago Fire

Haas described this season as, “Dramacomedyactionsuspensethrillerromanceallinone”.

Now that is a mouthful. But it is everything we want and expect from our favorite firehouse. We have six more weeks until Chicago Fire returns in January. So, we have plenty of time to speculate, and hopefully, we are ready for next year.