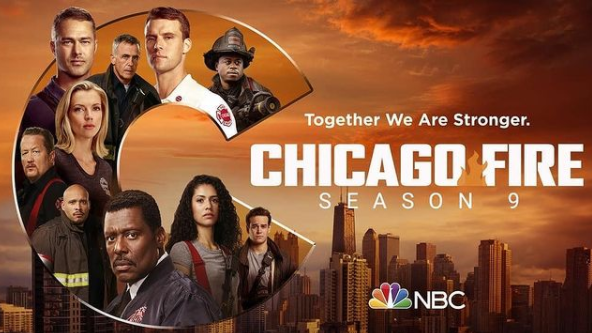 Chicago Fire premiered their first episode of Season 9 and there was a lot to unpack.

You have been warned, now let’s do this! The opening of the episode was dedicated to wrapping up storylines, introducing new characters, and giving us a look at what 51 looks like with Covid protocols. But our beloved firehouse still delivered its customary humor, antics, and heart through it all.

The show introduces Gianna Mackey (Adriyan Rae), the new paramedic on Ambo 61 first thing. Mackey grew up with Joe Cruz and there is a distinct brother/sister vibe that they display throughout the episode that will be fun to watch. We learn that Foster did indeed get back into med school and has been loving it. I will miss Annie Ilonzeh on Ambo, but I hope that Foster will move over to Med with a recurring role like other characters have done.

Unlike Foster though, Mackey is a young paramedic so Sylvie Brett steps into a mentor role rather than just a partnership with her, which I appreciate. Sylvie has often taken a backseat in Ambo because her previous partners all had very dynamic personalities, but it is great to see her confidence and strength finally on display in this episode.

Brett and Mackey take a call early in the episode that ends up with a drug addict holding Brett at gunpoint threatening to kill her if she can not save his brother from an overdose. This is not the first time Sylvie has had a gun to her. Honestly, it seems to be an all too common occurrence for her character. Despite the threat, she controls the scene and takes charge to try and save her patient, but the brother will obviously be a problem later in the episode.

Stella Kidd struggles to get Girls on Fire running again, but she has trouble with the red tape of it all. Severide is there for her though, being a steady constant. I love Kelly has grown as a character and his relationship with Stella is so strong. That love is on full display during the big rescue scene in this episode where Stella is the one that has to rescue Kelly. Stella continues to impress Boden and he asks her to take the upcoming Lieutenant’s exam. Stella gets a little nervous at the nod from Boden, but it is Kelly that encourages her to go for it and eases these fears. I am really excited to see what happens between the two of them this season.

As far as relationships go, the threat to Sylvie allowed for some movement between her and Casey. The fan-favorite: will they/won’t they couple is finally getting traction! Casey is the person Sylvie calls when she finds her door open after getting home. There wasn’t anyone in her apartment, but Matt refuses to leave until they find out who it was.

This lets them enjoy a cute game of accents where Matt gives a hilariously bad Australian accent. This scene is made all the better because Jesse Spencer is actually Australian! You’ve got to give the guy’s acting props he is playing an American who is trying to do a bad Australian accent. Brett certainly enjoys ribbing him over it and as the scene ends, we get a wonderful instrumental for the couple. I hope these become their theme music. The slow burn with these two is real.

Mackey and Gallo also don’t take long to strike up a flirtation, but big brother Cruz quickly steps in. Cruz in no uncertain terms lets Gallo know that it ain’t gonna happen with Mackey, and to Gallo’s credit he steps back. Mackey isn’t having it though and loudly confirms a date with Gallo in the common room that he never asked for, terrifying the poor guy because Cruz is not happy.

The drug addict that threatened Brett came back at the end of the show and chased Ambo while they were on the way to a call. The guy ended up running Brett and Mackey off the road and crashing the ambulance and his car. The crash was even worse because not only did he run them off the road, but they went off an overpass. Watching the ambulance hit the ground was gut-wrenching. I don’t know how they could have survived an impact like that other than divine intervention.

Did anyone else feel like that ending was season finale worthy? I sure did, and I was not wrong. During an interview, Derek Haas said, “The ending of the first episode was going to be the season finale”.

So, I finally have something to be thankful to Covid for. Because if I had to wait months to find out what happened to Brett I would not have been happy. Thankfully, I only have to wait a week. But this episode has set up several exciting storylines for the season and I here for it.