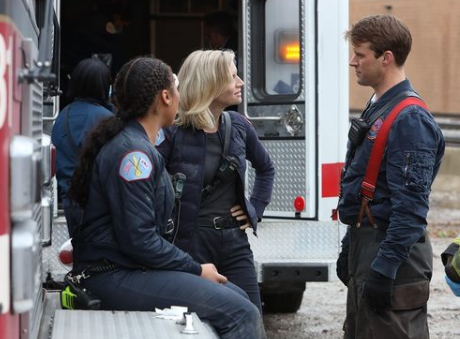 That was one of the longest weeks ever! I understand why the crash last week was supposed to be the Season 8 finale. But before we go any further spoilers are involved. You have been warned!

Last week Brett and Mackey were forced off an overpass by a grieving addict bent on revenge. But despite the astronomical odds, neither of them suffered any serious injuries from the crash. Miracles happen in television all the time though, and it is too early in the season for anyone to have a sidelining injury so I can sort of swallow that even though it makes me squint a bit.

Truthfully, I think Foster was supposed to be in the wreck and if her contract could not have been renegotiated, they might have killed her off. So, I guess I actually prefer this version because I like Emily too much and want her to come back at some point. Chicago Fire is never boring to be sure. 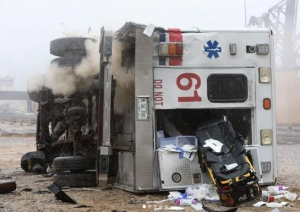 Truck 81 went out looking for the ambulance when they called for help and as they found the scene, we got to see just how much Casey cares about Brett. He takes a flying leap from the truck and sprints back to the scene. Even Gallo, the resident risk-taker, was surprised by Casey, which says a whole lot! Casey made it to the ambo but Brett was already out. However, that didn’t stop him from desperately checking to make sure she was really ok. They realize that the guy that forced them off the road crashed so Brett and Casey race to help him. I have to admire them for that. Once the man has been saved, everyone heads back to the firehouse.

The Brett and Casey of it All

Casey and Brett talk in the bunk room after everything calms down. But Casey downplays what he did and how desperate he had been to get to her after the crash. Brett accidentally says, “It’s always been you,” while they are talking. She quickly tries to backtrack that by saying Casey has been there for her as a friend and she is grateful for that, but Matt doesn’t look completely convinced.

Brett then goes to Kidd and freaks out about her slip-up. Kidd tries to calm her down but asks if it is such a bad thing for Casey to know how Brett feels (I happen to agree with Kidd, but that is beside the point). Brett decides to ignore what happened and wants everything to go back to normal because she is obviously scared of something, we just don’t know what yet.

But Casey is not quite ready to let it go and in a supremely awkward manner asks if she will be going to Molly’s. He also asks Herrmann and Mouch if they will be at Molly’s, and both of them are not buying it. Mouch sums up the scene perfectly, “That was weird, right?” Yes, Mouch, that was weird.

And it Doesn’t Stop There

The awkward moments keep rolling as the crew hangs out at Molly’s. Brett arrives and Matt immediately asks if he can get her a drink. Cap delivers one of my favorite moments of the episode by telling Casey he never asked to get him a drink (the subtle comedy that Cap always interjects into a scene just makes me happy). The atmosphere changes quickly though, as Gallo starts spilling all the tea. He tells everyone that Casey had jumped off the truck and only focused on getting to Brett. Gallo embellished the story a bit, but the truth was out and the look that Brett and Casey share, complete with their background theme song playing, just slows time down.

Brett leaves immediately after with no real reason as to why she bolts. Gallo thinks that he had upset her (poor naïve little boy). However, Casey and everyone else at the table knows Gallo isn’t the reason Sylvie ran off. Sylvie then avoids Matt on shift the next day, so things are starting to come to a head.

Stella was able to start her Girls on Fire meetings again this episode and her joy at helping these girls is radiant. However, she worries about her original recruit, Kylie. Boden pushes Kidd to look deeper, and she finds out that Kylie’s family is struggling financially so she can not attend meetings because she needs to work. Stella fixes both problems by getting Boden to hire Kylie as his assistant. This allows Gallo and Ritter, who had accidentally volunteered to do paperwork earlier in the episode off the hook. So, we can expect to see more of Kylie in the weeks to come.

Severide had a mission this week. He had to get Shay’s door back and no one and nothing was going to stop him. Severide and Casey replace the door so that Shay’s name is still on Ambo 61. After they finish Severide tells Gallo, Mackey, and Sylvie that those that come into house 51 should know whose shadow they are walking in, and it all starts coming together. This line is subtle but the look on Sylvie’s face shows that she takes this to heart. She knows exactly whose shadow she would be walking in and doesn’t want that. 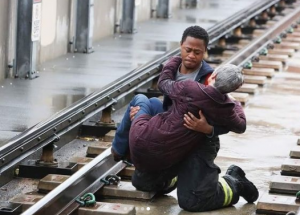 Joe helps Gianna navigate her insecurities about being a new paramedic at such a busy house. We also find out why he is so overprotective of her. Ritter makes “one hell of a save” that nearly gave all of us a heart attack; seriously guy you cannot be treating us that way it is not nice!

The Final Flash Over

Matt is not content to let Sylvie avoid him and confronts her with their now signature line, “Talk to me”. Sylvie admits that she was avoiding him and finally admits what she is feeling by kissing Matt. She looks like she fully expects him to reject her, but instead, Matt kisses her back! They share a soft, unhurried, and tender kiss. They have been moving toward this moment for so long, but they don’t feel the need to rush, which is going great.

As they are settling in though Sylvie asks Matt a question. And as you would expect that question stops everything cold. Sylvie wanted to know if Gabby ever came back to Chicago, would Matt leave with her. Matt tries to dodge, but she won’t let him, so he answers that he doesn’t know what he would do. This confirms all of Sylvie’s worst fears about starting something with Matt. She believes Matt is still in love with Gabby. And Sylvie doesn’t want to simply be a replacement, so she asks him to leave. Matt leaves looking guilty and Sylvie just looks crushed.

This was a painful scene to watch because the affection these two have for each other jumps off the screen. But they need to talk about this if they are going to have a chance at a relationship. I really hope that when Chicago Fire returns in January that this couple gets a real chance. But for now, we are officially on hiatus until January 6th.

Hallmark’s ‘Hearts Down Under’ Is Aussie Travel Romance
Lindsay Arnold Dishes On Her Plans To Return To ‘Dancing With The Stars’
‘Days Of Our Lives’ Two Week Ahead Spoilers: Gabi & Philip Hit The Sheets- Ava & Rafe Kiss
Did Candace Cameron Bure Post A Nude Photo Of Husband Val?
‘Bachelor’ Alum Ashley Spivey Shares Shocking Announcement Ahead Of IVF Plans