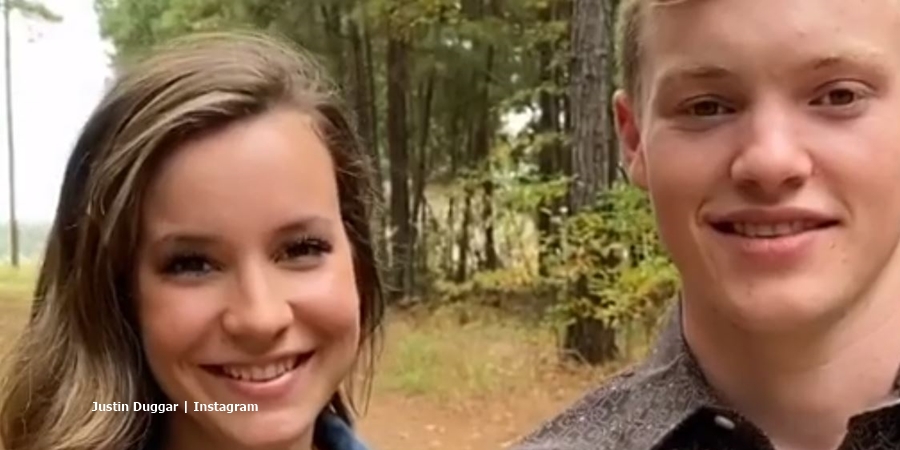 Justin Duggar and Claire Spivey celebrated his 18th birthday together and some fans thought that might delay their engagement. However, they became engaged the very next day. Now, Hilary Spivey, Claire’s mom shared photos of a surprise engagement party that the Duggar family attended.

We reported on November 16, that Justin and Claire became engaged. Justin actually celebrated his birthday in Texas, where Claire comes from. And they made their engagement announcement from there in a sweet video. Many fans think they seem rather young for such a serious commitment. But, Claire’s family seems totally thrilled about it. In fact, Hilary Spivey’s only has good things to say about the young Duggar man.

Now, on November 23, she revealed photos of the family who gathered together for a surprise party. In her caption, Hilary Spivey said about Justin Duggar and her daughter, “Such a blessed surprise engagement party! Wish we had pics of all the fam!” The first photo revealed Claire and Justin and with Michelle and Counting On patriarch, Jim Bob.

It’s not clear how many people attend the surprise engagement party, but at least some of the well-known TLC faces were there for Justin and Claire. It all looked rather low-key, and of course, not a single bottle of alcohol adorned the happy family pictures. But Jason, James, Jana, and John-David attended. With fall decorations up, the place looked quite attractive.

People noticed John David and Abbie with their child, Gracie. One fan commented, “Love seeing John David and Abbie and Gracie is so cute!!!😍” Meanwhile, others sent in the congrats to the whole family now that Justin Duggar and Claire became engaged. And of course, John and Abbie also become very popular on Counting On.

Did Justin hope to escape the family in Arkansas?

Cafe Mom reported that “Justin might be trying to escape the Duggar family, because he sure is trying to assimilate into Claire’s world — and fast.” Well, that speculation is based on the fact that Justin attended church in Texas. The Pastor, who married Anna Duggar’s sister, welcomed him there. But that might not mean he runs away from Jim Bob and the Arkansas clan.

Justin Duggar seems particularly religious. And his Instagram profile says, “What shall we then say to these things? If God be for us, who can be against us? Romans 8:31.” So, it’s not likely he does anything to dishonor his parents back home. Perhaps he spends a lot of time in Texas now that they became engaged, as that’s Claire home. But, they look genuinely in love, fans think.