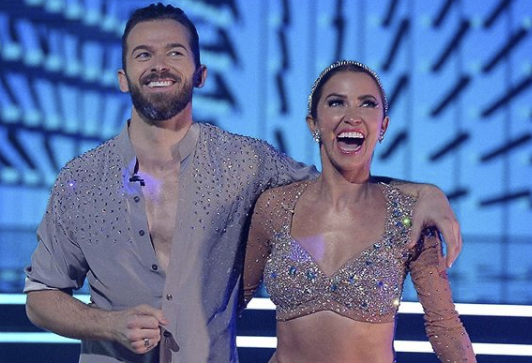 By now, many Dancing With The Stars fans realized that pro dancer Artem Chigvintsev used to date one of the judges. He and Carrie Ann Inaba met on the set of So You Think You Can Dance and dated from 2006 until 2009. Many fans speculated their prior relationship had something to do with her negative remarks towards Artem and his celebrity partner, Kaitlyn Bristowe. However, both Carrie Ann and Artem deny their relationship has anything to do with it.

“Oh my goodness! It was so long ago. It was, like, 2008, we’re in 2020. That’s 12 years ago!” Artem told Us Weekly. “I don’t think my previous relationship has anything to do with it, I’ll be honest with you, because she’s been judging me for the past however many seasons I was on the show. So there’s no, like, personal agenda whatsoever. I don’t think it has anything to do with it. I think she just really was harsh in the sense that she saw so much more potential than what we’ve been delivering the past two weeks and she finally got things that she’s been wanting to see.”

Kaitlyn Bristowe also came to Carrie Ann’s defense this week and asked for the cyberbullying to stop.

Allegations started flying around the time Artem said he felt Carrie Ann’s comments were too “personal.” Fans took this to mean she let her negative feelings about their breakup get in the way of her job. For several weeks, she was very harsh with Kaitlyn and Artem for no discernable reason.

But this week, things were different. The judges unanimously decided to give Kaitlyn and Artem a perfect score, and Carrie Ann had nothing but nice things to say to the couple. The pair even ran up to hug her after she gave them a standing ovation.

The Pair Prepares For The Semifinals

“I’m just really happy it all worked out and it all came to a very happy place because it was challenging for two weeks getting certain critiques and going back into rehearsals and still trying to be very positive, like, ‘No, we’re gonna do it, we’re gonna breakthrough,’” the dancer continued in his interview. “It can easily fall into that kind of, like, a bad space where it’s like, ‘Can I do it? Because I don’t think I can. I’m trying!’ So, it’s good to be back! It’s good to be in a good space especially knowing that it’s the semifinals next.”

After their perfect performance, Kaitlyn Bristowe and Artem Chigvintsev easily made it through to next week’s episode. It’s the semifinals, so the competition will really be fierce. Do you think Kaitlyn and Artem have what it takes to take home the Mirrorball Trophy? Let us know what you think in the comments.