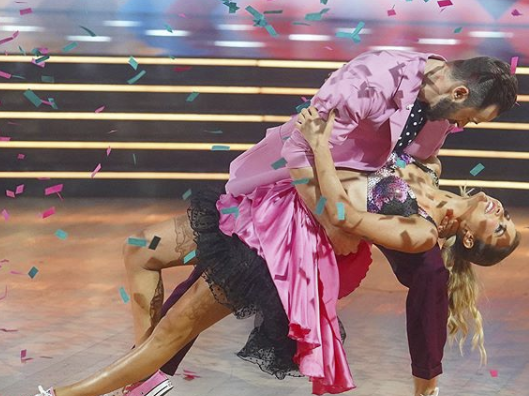 Over the past few weeks, Dancing With The Stars viewers expressed anger at Carrie Ann Inaba. For seemingly inexplicable reasons, the judge has been incredibly harsh with Kaitlyn Bristowe and Artem Chigvintsev. And no one can really figure out why.

Artem And Kaitlyn Keep Getting Low Scores From Carrie Ann

“At this point, it starts being a little personal,” Artem told Entertainment Tonight. “I feel it’s definitely, maybe not a different standard, but I feel like it’s different expectations. I don’t know. I’m watching back the dance itself, it’s like, ‘Oh, you can kick sharper!’ Well, I can say that about everybody who dances on the show today. I don’t know. It’s really odd.”

“I just want to know where it comes from. Is it from a place where you believe in us and you want us to do better?” the former Bachelorette wondered. “Is it coming from a place of, ‘I was hard on Hannah [Brown] and you’re another Bachelor girl’? Where is it coming from and how are we supposed to take it and bring it into our next rehearsal? What do you want us to channel and use from it? It’s very hard to understand that. Derek [Hough] says things and I’m like, ‘Great! Oh my gosh, I could work on that. Let’s use that next time.’ Same with Bruno [Tonioli]. And when Carrie says things, I’m like, ‘What do you want us to do with that?'”

“At this point right now we just feel like we’re never going to make her happy. It feels really discouraging, in a sense, to come back next week,” Artem added. “I was literally wanting to have ear muffs and put it on top of [Kaitlyn’s] head.”

Fans loved Kaitlyn and Artem’s Jive last night. It was fun and lively, but Carrie Ann still didn’t really seem to care much for it. She took points off for a “lift,” which kind of baffled viewers. If you haven’t seen their routine yet, you can check it out here:

For a while now, fans speculated that Carrie Ann did indeed have a personal issue with Artem and Kaitlyn. Not everyone knows this, but Carrie Ann Inaba and Artem Chigvintsev used to date from 2006-2008. It was quite a long time ago, but she’s been really harsh with him and Kaitlyn this season. Do you think there could still be bad blood there?

In any case, Carrie Ann Inaba has been accused of playing favorites by the fandom. Many argued that Chrishell Stause was nowhere near Kaitlyn’s level, yet she often earned high marks from the judges. Perhaps the favoritism issue has been addressed with the judges. Many viewers were shocked when the judges unanimously chose to save Skai Jackson over Chrishell last night.

What do you think? Do Kaitlyn and Artem deserve better? Leave your ideas in the comments.

Khloe Kardashian Reveals Truth About Relationship With Tristan Thompson: Are They Together?
Michael And Angela Deem Milking Their Baby Issues On ’90 Day Fiance’?
Jeremy Vuolo’s Recent Posts Get A LOT Of Attention
‘1000-Lb. Sisters’ Rumor: Wait, What is Amy Halterman Retiring From?!
Kaitlyn Bristowe Reveals All Past Plastic Surgery Procedures