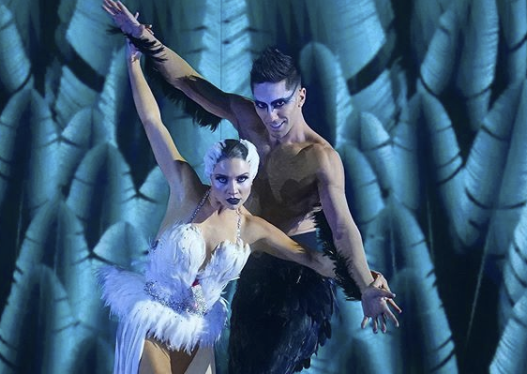 It was a great night for many Dancing With The Stars competitors. But Nev Schulman perhaps had the best night of them all. He and Jenna Johnson managed to score a perfect 30 for their stunning Paso Doble.

This week’s episode was Villains Night. The contestants and their partners dressed up as famous villains and characters from horror films for this fun Halloween themed episode. Nev and Jenna wore costumes inspired by the film, Black Swan.

If you missed out on this week’s episode, you can catch Nev and Jenna’s performance here:

The journey on Dancing With The Stars has been an incredible experience for the Catfish host. In fact, Nev says he is having the time of his life. On this week’s episode, he discussed how important the ballet was in his life. He and his dad are big fans of the New York City Ballet and this routine was very special to him.

Other DWTS Contestants Pull Ahead

Nelly and Daniella Karagach were another couple that performed remarkably well this week. They earned 27 total points for their Freddy Kruger-themed Argentine Tango.

Skai Jackson and Alan Bersten had been suffering in previous weeks but came back strong this week. They also earned 27 points. They also danced the Argentine Tango but dressed as characters from the Chucky franchise.

Kaitlyn and Artem were once the frontrunners, but lately, they don’t seem to hold the judges’ attention. Carrie Ann Inaba has been especially critical of them for the past two weeks. Do you think they will be able to come back strongly next week? It’s going to be a double elimination night, so everyone needs to be on their toes.

Although Monica Aldama and Val Chmerkovskiy had a good run, fans said goodbye to them this week. They were in the bottom two alongside Jeannie Mai and Brandon Armstrong, whom the judges chose to save.

If you love Dancing With The Stars and want to keep your favorite contestants safe, make sure to vote. Your votes keep competitors out of the bottom two. Do you think Nev Schulman and Jenna Johnson have what it takes to win it all? Let us know in the comments.

Dancing With The Stars comes back next Monday at 8 PM eastern time on ABC. You won’t want to miss out on another exciting moment!