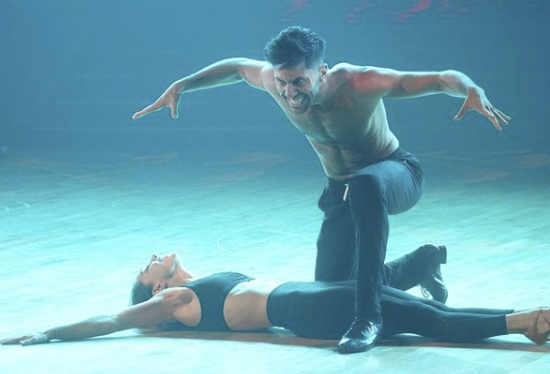 When the cast list for Dancing With The Stars Season 29 was unveiled, few thought Nev Schulman would make it very far. If you didn’t already know, Nev is the host of Catfish. We already knew he was entertaining. But hardly anyone knew he could dance.

But as the competition begins week 7, Nev is near the top of the pack. He and partner Jenna Johnson are in second place between Kaitlyn Bristowe and Artem Chigvintsev. Kaitlyn and Artem have an average score of 24 points while Nev and Jenna are only a hair behind at 23.5.

Could tonight be the night that Nev and Jenna hit the top of the leader board?

Nev Schulman Is Loving His Time On The Show

According to Women’s Day, Nev Schulman is having “the time of his life” during his time on Dancing With The Stars. As a photographer, he spent a lot of time capturing ballerinas and other dancers as they graced the stage. Now, the Catfish host gets to be part of the action.

“Being so passionate about the art form has created this desire and real dream to get to dance and move and utilize all that visual information I’ve been absorbing all these years and see if I could do it with my body,” said Nev. “To get to do that now in a way that’s so personalized, to spend three hours a day with a professional dancer in a studio focused only on me and learning how to dance, it’s just been such a dream come true. It’s amazing.”

As a child, Nev never took formal dance classes. However, he did spend some time with the National Dance Institute which introduced him to the art.

“I knew as a kid that I had natural dance ability,” he said.

He Also Has A Great Relationship With His Partner

Most of the celebrities get along with their professional partners, but Nev and Jenna are particularly close.

“We have a similar sense of humor, we’re both self deprecating and we like to tease each other, so it’s just been great,” said Nev. “Obviously she’s a phenomenal athlete, performer, and dancer, but I just enjoy hanging out with her. Getting to be goofy and have fun while working, what more can you ask for? I’m having the best time.”

It’s great to see that they get along so well.

Dancing With The Stars kicks off tonight at 8 PM. Make sure you tune in and catch Nev and Jenna’s stunning performance. If you want them to stay in the competition, you have to vote. Who do you think will have the best routine tonight? Leave your ideas in the comments. We’re always excited to hear from you!

Savannah Chrisley Gets Picked Up In New Guy’s Sweet Truck
Which ‘RHOC’ Alum Could Return As ‘Friend’ Of The Housewives?
‘KUWTK’ Fans Attack Kanye West’s Rumored Girlfriend Wanting Answers
Isabel Rock Tells Fans To Stop Body Checking Themselves
Todd Chrisley Talks About People Who Stab Him In The Back