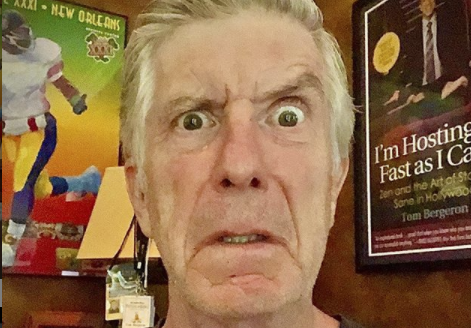 “We’re done … that train has left the station,” Bergeron said.

The show host asked if Bergeron missed hosting the show. He replied that he didn’t. After 2018, there were many changes that Bergeron didn’t really care for. He says for now, he’s enjoying his time off.

Great time yesterday chatting with @stutteringjohnm on a WIDE range of topics (for over an hour 😳) on his @YouTube channel pic.twitter.com/hdcTzeijWj

In July, Dancing With The Stars broke the news that Tom Bergeron and Erin Andrews would no longer host the show. Instead, Tyra Banks would take over. While the cast members have been professional about the whole situation, it’s understandable that they would also miss Tom.

In the podcast interview, Bergeron went on to say that some of the pro dancers said they were thinking about quitting the show in solidarity. While he appreciated the sentiment, Bergeron told them to continue anyway. Many of the pro dancers are in their 20s and early 30s and he didn’t want them to throw the opportunity away.

Even though Tom Bergeron parted ways with Dancing With The Stars, he says he wishes the show a successful run. He deeply cares for many of the cast and crew that still work on the show and wants to see them succeed.

The Former Host Defends The Show From Disgruntled Fans

Tom Bergeron has been incredibly professional throughout the whole ordeal. But on the other hand, many fans declared over the summer they wouldn’t watch without Tom. They frequently slam the show in the comments section on his Instagram, but he does his best to defend Dancing With The Stars.

In one Instagram post, Bergeron recently confirmed the ratings were high and the show was still doing quite well. Fans also like to pick on Tyra for one reason or another, and the former host defended her too.

In September, he got out some frustrated in a “smash room.” Someone asked if he planned to smash a photo of Tyra — and he quickly shut that down.

“Nope, nothing against Tyra. I teased the mirror lip poster, but that was having a laugh at the marketing, not personal,” Bergeron replied.

Even though Tom Bergeron isn’t involved with Dancing With The Stars Season 29, there is still plenty of things to like about the new season. For example, few people knew that Catfish‘s Nev Schulman could dance, but he’s doing remarkably well. If you’re curious to see what the new season is like, tune in on Monday night at 8 PM eastern time. It’s going to be Villains Night, so there will be plenty of entertainment.