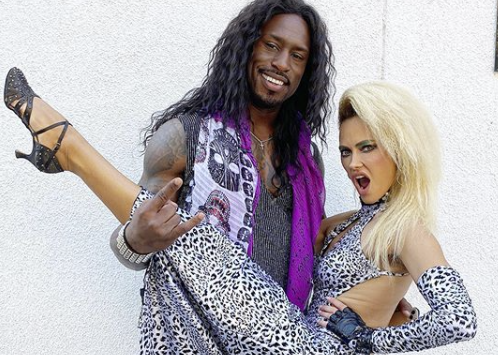 NFL star Vernon Davis and his partner Peta Murgatroyd narrowly avoided elimination last night on Dancing With The Stars. They were in the bottom two along with Jesse Metcalfe and Sharna Burgess. Ultimately, the judges chose to save Vernon and Peta. It was a close call, but Vernon and Peta will be back to dance another week. That is, as long as there aren’t any more injuries.

The competitors speak with the press immediately following an episode. Peta was noticeably absent last night. She sustained a neck injury during the couple’s Tango to Bon Jovi’s “Livin’ On A Prayer” and needed to seek treatment. The dancer addressed fans’ concerns on Twitter.

Sorry everyone tonight on @DancingABC I was absent from our spots after our dance. I pulled my neck and had to run to therapy. I’ll be ok but I needed to get it seen to ASAP. Thanks for the concern. Love you all and I’m looking forward to next week xxxx

“It’s the ’80s. There’s hazard pay involved, with the wigs and stuff. You could definitely tweak a neck with ’80s [routines],” judge Carrie Ann Inaba shared with ET. “But I hope she’s OK, most importantly… she’ll be dancing next week so I hope she’s okay and takes care of her neck.”

This certainly isn’t the first time someone suffered an injury this season. A few weeks ago, Kaitlyn Bristowe injured her ankle. But she pressed through the pain and managed to earn the judges’ praise.

If Peta was in pain during the performance, no one knew. They earned a combined total of 21 from the judges. The judges were impressed with the couple’s progress thus far on the show and made the unanimous decision to bring them back next week.

Hopefully, Peta will make a full recovery and be able to come back for week six.

Fans Were Relieved To See The Real Costumes

Fans were also happy to see the outfit she performed in was not the one she teased on Instagram. Earlier this week, viewers saw Dancing With The Stars contestants get down to business in the rehearsal room while wearing the most ridiculous 80s workout outfits.

And Peta’s gold leotard left little to the imagination. Or so fans thought.

After fans criticized her revealing costume, Peta edited her caption to add that she was wearing skin-colored tights. There was never any danger of a wardrobe malfunction.

You can see the photos from rehearsal on Peta’s Instagram page:

Debbie & Duke 💥For one night only….Monday on @dancingabc 💪🏻 (and ya’ll I have skin colored tights on)

What did you think of Peta and Vernon’s performance last night? Do you think it will be enough to keep them out of the bottom again next week? Make sure to send Peta plenty of positive vibes as she continues to heal.

If you want to keep this great couple around, make sure to vote. Your votes keep couples out of the bottom. Dancing With The Stars will be back for week six next week at 8 PM on Monday night. Tune in to ABC and don’t miss out on a single moment.