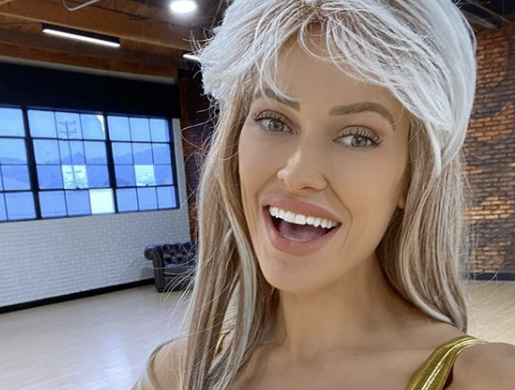 As fans eagerly await the next episode of Dancing With The Stars, celebrity contestants are showing off sneak peeks of their new outfits and routines. Superbowl Champ Vernon Davis and partner Peta Murgatroyd will Tango to Bon Jovi’s “Livin’ On a Prayer.”

Peta recently posted some fun behind the scenes photos to get fans excited. The couple plans to dress in 80s workout clothes, but fans weren’t super thrilled about Peta’s ensemble. Many feel that it’s way too revealing.

Peta And Vernon Step Back In Time For 80s Night

“Debbie & Duke 💥For one night only….Monday on @dancingabc 💪🏻 (and ya’ll I have skin colored tights on)” Peta captioned her Instagram photos. Maybe she does have skin-colored tights on, but you wouldn’t really know that just by glancing at her outfit.

Debbie & Duke 💥For one night only….Monday on @dancingabc 💪🏻 (and ya’ll I have skin colored tights on)

Skin-colored tights will definitely prevent any wardrobe malfunctions, but it really looks like Peta’s gold leotard will slip at any moment.

“How are your womanly bits not falling out? I’m amazed 😂” wrote one viewer.

“Omg I thought you didn’t have pants on in the first picture! 😂” said another.

However, others quickly came to Peta’s defense.

“the comments have me LAUGHING. y’all….she has skin colored tights on as MANY people did in the 80’s with the high cut leotards and how the hell are y’all being more prude than people were in the 80’s 💀 have you not seen the jamie lee curtis & john travolta aerobic video/video? 😂😂😂 (also this is clearly what she’s practicing in to get into theme & not what she will be wearing on tv),” another comment read.

But is this actually what Peta Murgatroyd will wear on Monday night? We will all have to stay tuned and find out. In the meantime, follow Peta on Instagram for more behind the scenes fun.

Dancing With The Stars Enjoys A Little Throwback Thursday

On Thursday night, the official Dancing With The Stars Instagram page posted some old photos of Bruno Tonioli to celebrate the upcoming episode.

Channeling ALL of @brunotonioliofficial's 80s vibes on this #TBT. 🙌🏼 #DWTS #80sNight

Plenty of DWTS castmates expressed their joy at the old photos. Wouldn’t it be a treat if we saw Bruno perform a routine? Derek Hough already confirmed he will take the stage at some point this season. Maybe they could make it a duet?

Costume choices aside, there is plenty to look forward to this week. How do you feel about Peta’s outfit? Do you love it, or do you think she would look nicer in something different? Be sure to let us know how you feel. Keep in mind, this may just be a practice costume. We’ll have to wait to know for sure.

Don’t forget to watch the 80s Night episode coming this Monday night to ABC. You won’t want to miss out on a single moment!

‘Sister Wives’ Star Meri Brown Gets Love From Her Daughter
‘Below Deck’: Why Does Eddie Lucas Like His Cabin ‘Ice Cold’?
‘KUWTK’: Did Khloe Kardashian Rip Off Beyoncé?
‘Vanderpump Rules’ Fans Think Stassi Schroeder Was Made To Be A Mom
Rachel Lindsay May Host ‘After The Final Rose’ This Season