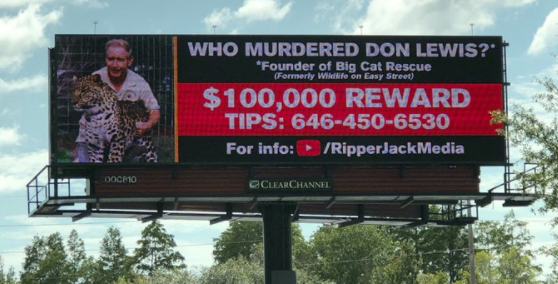 Tiger King fans are very familiar with the story of Carole Baskin and her husband’s mysterious disappearance. Tiger King mania was big in the spring, but no one forgot about Carole Baskin’s late husband Don Lewis and still want answers. His family does too. They are offering a $100,000 reward for any information that can help authorities solve his disappearance.

On Tiger King, Joe Exotic famously accused Baskin of being responsible for the disappearance. He claims she killed him, disposed of his body in a meat grinder, and then fed the remains to her tigers. That sounds like quite the tall tale, but if you saw Tiger King, you know anything is possible.

Of course, Baskin continues to deny these claims.

“There are not words for how disappointing it is to see that the series not only does not do any of that but has had the sole goal of being as salacious and sensational as possible to draw viewers,” Baskin said of her portrayal on Tiger King.

Did The Handyman Kill Don Lewis?

Now, some have reason to believe Baskin’s handyman, Kenny Farr, was involved.

In a new episode of 48 Hours Suspicion that will air September 9, Farr’s ex-wife claims she is incredibly suspicious that he was involved. Trish Farr-Payne says on the night of the disappearance in 1997, Kenny drove home in Lewis’s own van and told her never to speak of his death. On that night, the van allegedly contained weapons. She also reports Kenny Farr brought home a padlocked freezer. However, just days after Lewis’s appearance, the freezer disappeared too.

However, this isn’t the first time Trish Farr-Payne spoke up. She reportedly spoke to the authorities back in 2000. According to Farr-Payne, her ex-husband behaved oddly after Lewis disappeared. She claimed he stayed home from work while the police investigated. Trish Farr-Payne felt frightened and said her ex-husband threatened to use the meat grinder if she spoke to the police. He allegedly told her he would hurt her “like I did Don.”

What do you think of this testimony? Do you think it holds water? Let us know what you believe in the comments. We want to hear from you.

Carole Baskin is a contestant on Dancing With The Stars Season 29. People are bound to talk about Don Lewis’s disappearance again.

Fans will have to wait and see what happens from here. Dancing With The Stars returns September 14, but you can catch 48 Hours Suspicion much sooner. CBS plans to air the episode on September 9. Will you be watching? Hopefully, authorities will solve Don Lewis’s disappearance soon.