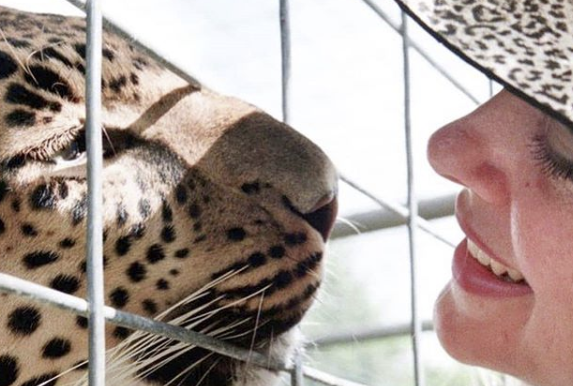 Carole Baskin is in the news again.

If you aren’t familiar with her, you need to watch the Netflix special, Tiger King: Murder, Mayhem and Madness. It premiered during the height of quarantine days and we all binged it as fast as we could. TV Shows Ace has plenty of content on the series and its colorful characters.

Those familiar with Carole Baskin’s story know her second husband, Don Lewis, mysteriously disappeared in 1997. Now, Lewis’s family is demanding to know the truth. According to TMZ, they put up billboards and are offering a $100,000 reward for information.

If you live in the Tampa area, you may see these signs around. According to the Tweet below, the billboard in the photo is very near Carole Baskin’s Big Cat Rescue. She and Don Lewis founded the Big Cat Rescue together.

There is an investigation underway, but other than the billboards, things are pretty hush-hush. Tiger King star Joe Exotic famously blamed Don Lewis’s murder on Baskin herself. She denies any involvement. According to TMZ, the sheriff involved in the case does not consider Baskin a suspect, although he is somewhat suspicious.In June, TV Shows Ace did a story on a new development in the case. We learned from a PEOPLE article that someone forged Don Lewis’s will. However, the statute of limitations expired so there is nothing that can legally be done.”There’s no recourse,” the sheriff explained. “A judge deemed it valid, so the civil side of it would be execution of the will, the disbursements of the funds is one thing. But then you have the criminal side of it, it’s unable to be prosecuted because of the statute of limitations.”That certainly seems suspicious. Many Tiger King fans suspect Carole Baskin had something to do with the disappearance as well. What do you think? Share your opinions in the comments below.

Another Reason for Joe Exotic to Hate Carole

From the second you watch Tiger King, one thing is immediately clear. Joe Exotic and Carole Baskin hate each other with every fiber of their beings. Over the summer, Joe gained another reason to hate her.

Carole Baskin is taking over his zoo.

On June 1, courts granted Big Cat Rescue control of G.W. Exotic Animal Memorial Park. To learn more about the case, be sure to read through our report on the matter.

If you haven’t seen Tiger King: Murder, Mayhem and Madness yet, you can catch it on Netflix right now. Be sure to tell us what you think of the whole ordeal.

Hopefully we will know more about Don Lewis’s murder as the investigation continues. We’ll let you know as soon as we know anything new. Follow us on Facebook for more updates.