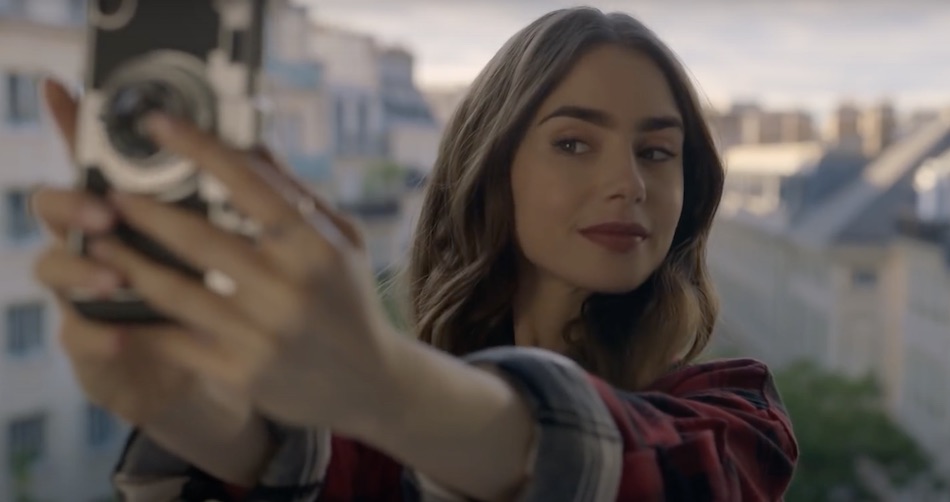 Netflix and Darren Star are ready to whisk viewers away to the City Of Lights with the new series Emily In Paris. Starring Lily Collins (Mirror, Mirror), this new dramedy series will surely be your new obsession.

What Is Emily In Paris About?

Imagine going to Paris in a dream job assignment! The Netflix preview of Emily In Paris shows us Emily Cooper (Collins) living that very dream. She is a social media manager, who works for a Chicago marketing firm and is now on assignment in Paris. She has a fabulous apartment, a crazy-cool eclectic wardrobe worthy of the fashion capital, and a dream job. What could go wrong?

Emily seems to delight in indulging in everything that Paris has to offer. But is everything going ok? Right away, one of her Parisian pals asks Emily if the French are listening to her American “point of view.” As the preview progresses, we see Emily start out very optimistic and leading the conversation, to being the target of rejected ideas. But, Emily is ever the optimist.

In Emily In Paris our heroine meets some very charming and enticing men. These well-groomed gentlemen are gorgeous, and there is the promise of a great romance in this new Netflix series.

Why Younger, SATC, The Devil Wears Prada Fans Will Love Emily In Paris

If fans of Younger, SATC and The Devil Wears Prada seem to find the visual feel of Emily In Paris looking familiar, it is because there is some common DNA. For example, costume consultant, Patricia Field is working her exceptionally talented styling skills in this new Netflix series. She also happens to be the costume consultant of all of four of these shows and movies.

The other common denominator for the three listed television series is Darren Star, Star. He is currently working on developing a Younger spinoff starring Hilary Duff. Known as dramedy king, he created Sex and The City, Younger and now Emily In Paris.

Younger fans are still waiting for Season 7 to film, let alone air on TVLand. It originally should have just finished airing, but it still has yet to be filmed due to Covid-19. Worse yet, Hilary Duff has already revealed that this will be the final season.

Emily In Paris will certainly be a great distraction. This show offers the same sort of glitz, glamour and high-flying dream career in a snappy television series that Darren Star excels in creating.

When Does This New Netflix Series Drop?

So, grab yourself a bottle of champagne, brie and a baguette and plan on an easy six-hour binge.