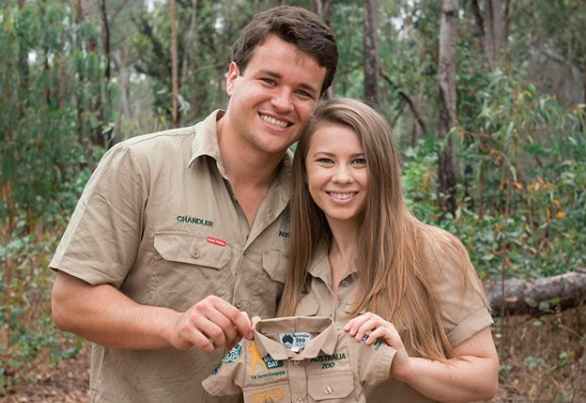 Surprise! If you didn’t know already, Bindi Irwin and Chandler Powell are pregnant with their first child. Bindi is now giving fans a peek into that intimate moment. She openly shared the story of how she told her husband she is pregnant!

The famous Crocodile Hunter’s daughter opened up via Instagram on Tuesday, September 1. She shared a very detailed post reflecting on the day she and Chandler found out they were going to be parents.

Bindi described the feeling of learning she was going to become a mom as a moment where time just froze. After she took the pregnancy test, Bindi revealed she ran into the kitchen where her sweet husband was making the couple tea.

Bindi continued describing the moment saying, “This news would change the course of our future in the best way. I started crying tears of pure joy and told my sweetheart husband that my test was positive.”

Additionally, Bindi included that the pair’s puppy Piggy was in the room with them. According to Bindi, Piggy knew something special was going on. And it reminded her “of just how perceptive animals are.”

Of course, Bindi would include the couple’s dog in this precious moment. The situation could not have been more perfect for the animal-loving duo.

But, Chandler is not the only Powell about to become a father. His brother, Cameron Powell, also has a baby on the way with his wife, Kristin. Looks like they will be double trouble in the family!

Reflecting on when we found out that we are going to be parents. ❤️ Discovering that I was going to become a mother will forever be a moment where time stood still. I took a test and ran into the kitchen where Chandler was making us tea. He didn’t hear me come in so I speechlessly watched him pouring the water into my most loved hedgehog mug. This news would change the course of our future in the best way. I started crying tears of pure joy and told my sweetheart husband that my test was positive. We were beaming while our adorable puppy Piggy sat on our feet wondering what was going on. It reminded me of just how perceptive animals are. We sat together with tea talking about the future and how we were going to share such wonderful, life changing news with the people that we love. In that short span of time the gorgeous baby I'm carrying became the most important part of our lives.  It is such a blessing knowing that this tiny person has chosen us as parents. Our baby Wildlife Warrior is going to be so very loved by our families and entire Australia Zoo team. I can’t wait to find out what this amazing new soul loves in life, and experience the world all over again through their eyes.

Now, the couple actually announced they were pregnant to the public back in early August. This announcement came just five short months after the pair married! Bindi and Chandler married back on March 25, 2020, at the height of the coronavirus pandemic.

Sadly, this resulted in the couple making some pretty drastic changes to their wedding plans. In spite of it all, they were able to have a beautiful ceremony and were sure to honor Bindi’s famous father Steve Irwin.

Finally, even after marrying Chandler, Bindi found another way to honor her father who died from a stingray barb in 2006. She actually did not take Chandler’s last name. Instead, she kept her own last name, Irwin.

So, what do you think of Bindi and Chandler’s big news? Let us know what you think in the comments below. Be sure to keep up with the Irwin family on Crikey! It’s the Irwins on Animal Planet.