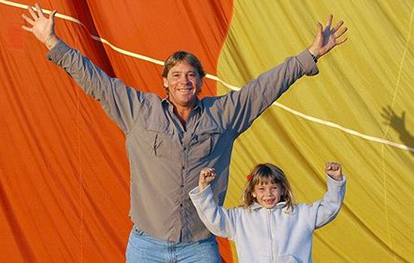 After marrying Chandler Powell, Bindi Irwin chose to break tradition and not take Chandler’s last name. Instead, she kept her own last name, Irwin. She did this in memory of her father, Steve Irwin, who died from a stingray barb in 2006. Bindi and Chandler made this decision together. Additionally, the family displayed a picture of Steve at the wedding.

In an exclusive interview with Entertainment Tonight, Bindi explains what led to this decision. She says, “I think that for me personally, after dad [Steve Irwin] passed away it was really important for me to feel close to him, and having his last name means so much to me.” The Irwin family has always been close, as evidenced in their show, Crocodile Hunters. Chandler agreed with Bindi’s decision to stick with the last name Irwin.

The Irwin family included Steve in the wedding

Although Steve didn’t live to see his daughter get married, the family made him a part of the wedding. Bindi Irwin’s mother, Terri Irwin, tells ET, “This overriding feeling was that Steve wasn’t there, and we wished so much that he could’ve been there because he would’ve been so proud.” Bindi adds, “I think he really, really would’ve loved Chandler.”

To make it feel more like Steve was at the wedding, the family set out a picture of him with their late dog, Sue. Bindi got her middle name from this dog, who Bindi will always remember. ” I love that photograph because it symbolizes everyone who could not be there with us on that day and it’s just beautiful and it’s such a perfect moment.” Bindi goes on to explain how close Steve and Sue were. She wishes that they both could have been there to celebrate her marriage.

This moment. My favourite wedding day photograph. This isn’t the fairytale image capturing the ‘perfect’ wedding day feeling. In fact, it’s quite the opposite. This picture was taken after we had to change our entire wedding. We decided not to have wedding guests due to the global crisis for everyone’s health and safety. Our family and friends couldn’t be there to celebrate with us. However, they all encouraged us to continue on and get married. From their love and support, we felt love win. We changed our wedding date the night before we got married but we were determined to let love win. Everything from the cake to the flowers were different. Thankfully, we worked with local businesses to make it happen. They helped love win. On our wedding day we were finally about to get married and the paparazzi flew over us in a helicopter scaring our wildlife. We had to leave our stunning wedding venue on the African Savannah for their safety. I said goodbye to the place I had dreamed of getting married for so many years. At that moment I remembered the filming barn where I’d spent much of my life with my family working on Crocodile Hunter and Bindi The Jungle Girl. I knew we could make it work and our zoo crew helped us to move everything inside. I watched love win. I was there in my wedding dress, husband-to-be by my side, moving tables and flowers and trying to make our day finally become a reality. At one point I sat on a chair in the corner doing my best not to think about how overwhelming things seemed. I missed the people who couldn’t be there, my dad, Chandler’s family, our dear friends, my family. Chandler stopped what he was doing and sat next to me. I asked him to list me happy things. He proceeded to remind me that love ALWAYS wins. That’s when this picture was taken. Despite everything, we got married and I’ll forever be grateful. Sure, things weren’t perfect but that’s life. Life is messy and beautiful and meant to be felt. We were overcoming great obstacles to prove that unconditional love is the most important foundation. Our wedding day wasn’t what we planned but it was an extraordinary starting point for our marriage to bloom. ❤️

Chandler thanks Steve for “inspiring” him

Bindi Irwin’s new husband Chandler says a special “thank you” to Steve for inspiring him and many others. Chandler grew up watching Steve on Crocodile Hunters, which created Chandler’s passion for animals. He also says that Steve brought him to Bindi.

After watching Steve on TV, Chandler dreamed of going to Australia to see the wildlife. Chandler met Bindi when she led him through the Australia Zoo. He tells ET, “If it weren’t for [Steve], I don’t know how we would have met.” The couple has been in love ever since they met during the zoo tour.

Bindi Irwin’s love story is similar to her parents’ relationship

Bindi Irwin explains that her parents met at the Australia Zoo, just like she and Chandler did. Now, Bindi and Chandler are spending their honeymoon at the Australia Zoo caring for the animals. Bindi’s parents also spent their honeymoon with wildlife. She says, “Mom and dad’s honeymoon was spent catching crocs with an entire film crew.” Bindi loves that she is able to carry on the family’s traditions along with the family name.

Be sure to check TV Shows Ace for more updates on your favorite shows.