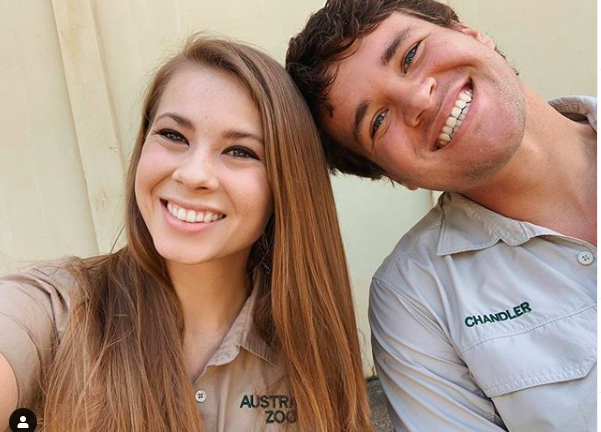 As Bindi planned her wedding to Chandler Powell, honoring her father was going to be a big part of the ceremony. She did just that by getting married in the garden at the Australia Zoo.

Firstly, Bindi told People, “Where we got married was such a special place to dad. It’s a beautiful little area where he had filmed for many years. It felt really wonderful and just meant to be.”

Additionally, a picture of Steve with his dog Sui blown up on an easel honored him. Bindi said, “Mom and Robert were standing right next to dad as we exchanged vows. It was a lovely moment of peace and happiness.” There was also a candle-lighting ceremony for Steve during the ceremony.

Her father died Sept. 4, 2006, while working on an underwater film. He was only a young 44 when a stingray fatally attacked him.

March 25th 2020 ❤️ We held a small ceremony and I married my best friend. There are no words to describe the amount of love and light in my heart right now. We’ve planned this beautiful day for nearly a year and had to change everything, as we didn’t have guests at our wedding. This was a very difficult decision but important to keep everyone safe. We wish all of our friends and family could have been there with us, however it’s lovely that we will be able to share photos and videos. Right now we’re encouraging the world to hold onto hope and love, which will carry us forward during this profound time in history. Today we celebrated life and revelled in every beautiful moment we shared together in our Australia Zoo gardens. Mum helped me get ready, Robert walked me down the aisle, Chandler became my husband and together we lit a candle in Dad’s memory. We shared tears and smiles and love. Thankfully, since we all live at Australia Zoo as a family, we could be there for each other. To everyone reading this – stay safe, social distance and remember LOVE WINS!

Bindi’s wedding ceremony was family-focused, even her dress!

She wore a long-sleeve gown, inspired by the one her mom wore to marry her very special father in 1992.

Bindi revealed to People that she admired her mom’s dress ever since she was little. The dress itself is over 50 years old. She sadly couldn’t wear the exact dress, because it didn’t quite fit and was too old to be altered. But, she did find a similar dress, and this one had special sunflower sleeves.

Sunflowers are special to her. Bindi explained, “When we would go on projects and drives together, we’d often drive through these huge sunflower fields in the middle of nowhere and we always stopped to take them in.”

Coronavirus did not keep the couple apart

Bindi and her now-husband planned a ceremony with 200 guests but canceled days before due to COVID-19.

Despite this, they married in an intimate ceremony in the garden at the zoo. Only the couple, zoo animals, and three guests were present. The guests were Terri (Bindi’s mother), Robert (Bindi’s brother), and Steve’s best friend, Wes Mannion.

Lastly, Bindi’s bouquet sported a khaki ribbon in honor of her dad. “Most brides have something blue; I had my khaki,” said Bindi.

Let us know what you think of Bindi’s super sweet wedding and share your favorite memories of Steve in the comments below! I know I will personally always miss the famous Crocodile Hunter.