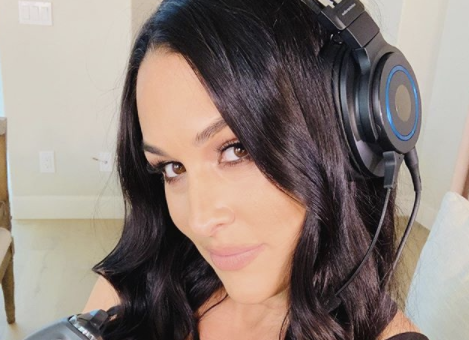 Former WWE superstar Nikki Bella just put her Arizona home on the market. If you watched Total Bellas this season, you probably remember episodes featuring the construction. According to Bleacher Report, the home sits “inside a gated community, features five bedrooms, five-and-a-half bathrooms and three fireplaces on a 10,000 square foot lot.” The asking price? $1.995 million.

TMZ suspects that Nikki and her fiance, Artem Chigvintsev, just need more room. Nikki gave birth to their son in July. Five bedrooms seems like plenty of space for a family of three, but to each their own.

Nikki Bella and Her Fiance Are Growing a Family

Nikki Bella and Artem Chigvintsev met during Season 25 of Dancing With The Stars. They finished 7th in the competition. After a year of dating and an engagement announcement, Nikki revealed to the world she was expecting a child with Artem. She gave birth on July 31 to a boy. For now, we still don’t know the baby’s name. We assume Nikki and Artem are enjoying their privacy for the time being.

Nikki’s sister, Brie Bella, gave birth to a baby boy one day later. For a while, fans enjoyed guessing which of the twins would give birth first. The sisters are incredibly close and even did a nude maternity shoot together. Fans assume their children will be just as close.

Besides the baby announcement, Nikki and Artem may have some more good news to share. Good Morning America recently teased that one more pro will join the upcoming Dancing With The Stars cast. Right now, all signs point to the mystery cast member being Artem Chigvintsev. He wasn’t part of the cast last year, which was absolutely devastating.

“Obviously, it was a massive shock. It’s not even a job, it’s a lifestyle if you’ve been doing it for a very long time. There was never a thought in my mind that I’m not going to be doing it,” Artem said. His absence clearly wasn’t his choice. Nikki voiced her support for Artem and hoped he would be able to return to the show soon. Be sure to tune into Good Morning America on Monday to find out the big news.

MONDAY ONLY ON @GMA: Guess who? Literally! We've got another big @DancingABC-sized surprise for you — LIVE!#DancingOnGMA#DWTS pic.twitter.com/yZxMITi0I7

How long do you think Nikki Bella’s dream home will stay on the market? With COVID-19 in full swing, no one exactly has much spending money these days. Do you think she will lower her asking price? Let us know how you feel in the comments.

Are you following us on social media? Be sure to like TV Shows Ace on Facebook and Twitter so you always stay updated. We have lots of celebrity and entertainment news to share with you.