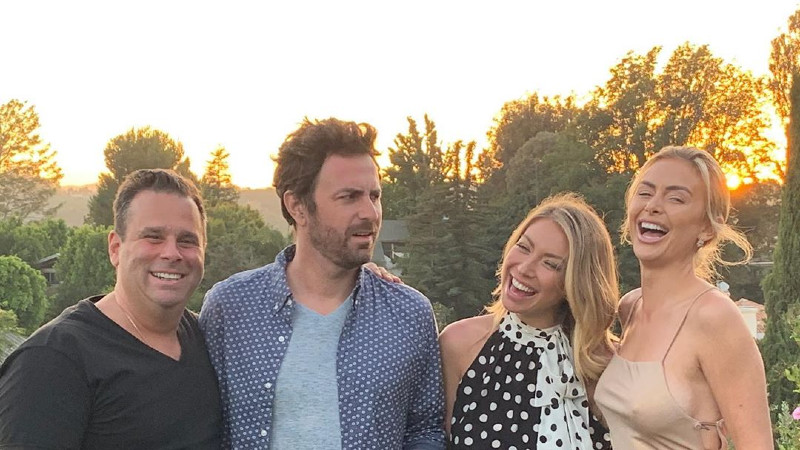 Baby’s first boat ride! Stassi Schroeder and her baby bump went for a ride on Randall Emmett’s boat this weekend.

Does it count if you’re in the womb at the time?

Vanderpump Rules star Stassi Schroeder is spending quality time with her fiance and her friends before the baby comes. As fans know, the former reality star’s pregnancy announcement came days after she was let go from the Bravo show. So, fans can only catch a glimpse of Stassi’s growing baby bump through her occasional posts to Instagram.

What Randall Emmet posted as a guy’s trip is more like a couple’s trip. He posted a video of Tom Schwartz, Jax Taylor and Beau Clark on Randall’s private jet. The caption said, “The boys are back!”

However, further IG Stories from Randall revealed that their respective significant others WERE there. But at the other end of the plane. It seems the men and women split into two groups for the plane ride. The word on Twitter is that the group was heading for Las Vegas.

Stassi Celebrates the ‘Half-Way’ Mark in a Bikini

In June, Stassi said that she is due with a girl in January of 2021. In her announcement photo, she already had a pretty good-sized bump. This led to fans speculating how long she’d been keeping her secret.

Despite her past mistakes, many fans still like Stassi and wish her pregnancy could play out on TV. It does play out a little on her Instagram Stories. On Saturday, August 15, she took to her IG Stories to share her growing baby bump.

Stassi also wrote that she is “20 weeks” now, halfway there. While Beau is sitting in front of Stassi, you can still see Stassi rocking a pink bikini. And a baby bump. Beau’s own Instagram Stories reveal that the couples are all on Randall’s boat. A boat that includes a slide!

Lisa Vanderpump Says She Hasn’t Heard From Her Former Employee

Lisa Vanderpump has a new podcast coming out soon. She has yet to announce when the All Things Vanderpump podcast will be out. But Lisa has been doing media to promote the new venture. Of course the topic of Stassi’s firing comes up. Lisa doesn’t agree with Bravo’s decision to fire Stassi and Kristen Doute.

In a surprising revelation, Lisa says that she hasn’t talked to Stassi since the firing or pregnancy announcement. That seems odd, considering Stassi used to be close friends with Lisa’s daughter Pandora.

She did reach out to Stassi several times, but never heard back.

Lisa is in the dark as much as everyone else about whether Bravo will bring Vanderpump Rules back for another season. She thinks there will be some new faces if the network does continue the reality show.

Check back with us for updates on the status of Vanderpump Rules.