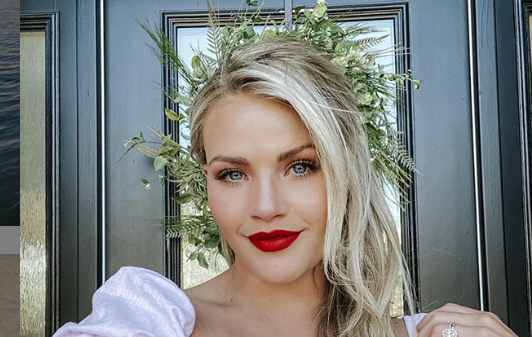 Dancing With The Stars fans likely all know about the host shakeup by now. Executive producers recently announced the show will be moving in a new creative direction — without Tom Bergeron or Erin Andrews. The announcement even stunned DWTS pros like Witney Carson. After the announcement came in mid-July, many speculated who would be taking their place.

Witney Thought Alfonso Ribeiro Could Be the Next Host

We know now that Tyra Banks will be hosting the upcoming season of DWTS. However, at the time, no one was exactly sure what would happen next. Witney thought Alfonso Ribeiro would make a great host.

“I texted Alfonso and I’m like, ‘You’re the new host, aren’t you? Tell me!’” Witney said. “And he’s like, ‘It’s not me.’ So I definitely thought [of] Alfonso, for sure. Just because he’s so involved. He loves the show. He is so knowledgeable in dance, and in judging and hosting. So I just thought he’d be a perfect fit.”

Witney is taking this season of DWTS off because of coronavirus concerns and her pregnancy. However, she is confident Tyra will make a great host too.

Please join us in welcoming @tyrabanks as #DWTS host. Thank you to @tombergeron and @erinandrews for so many seasons of glitz, glamour, and good times!

“She’s a great host already. We already know that we’ve seen her on TV before and I think she’ll be great. I honestly do,” Witney said to Us Weekly. “We’ll just have to wait and see because it will definitely be different … But it’s the same old show that we’ve seen year after year, so I think it’ll be OK.”

Even though Witney thinks the show is moving in a positive direction, she will always have fond memories of Tom Bergeron.

“Tom has been around for so long. He is really the heart of the show,” Witney says. “He’s like an uncle to me too. We’re very close, so I think he will be very, very missed.”

We will definitely miss him too!

Could There Be More DWTS Babies on the Way?

Witney isn’t the only DWTS pro to announce her pregnancy this year. Her good friend and fellow dancer, Lindsay Arnold, is also expecting. But they may not be the only two.

“I think that our close friends like Emma [Slater] and Jenna [Johnson], I bet you they’re thinking about it. I don’t know exactly when, but I have a good feeling,” Witney said to Us Weekly.

All the pros are pretty good friends, so it would be really sweet if their children were all the same age and grew up together. Could Witney be right? Who do you think will be the next professional dancer to announce their pregnancy? We’ll fill you in as soon as we know.

Follow TV Shows Ace on social media and remember to regularly check back with us. We have all the television and celebrity news you could ever want.