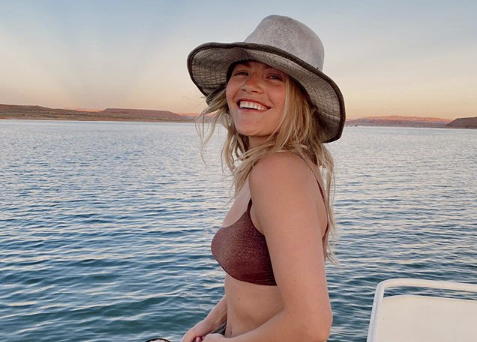 Dancing With The Stars will be back for Season 29 in September but without a few familiar faces. Pros Witney Carson and Lindsay Arnold plan to take the next season off. Witney confirmed in an interview with ET her decision mostly stemmed from Coronavirus concerns. Both dancers are expecting right now.

“We had quite a few conversations about that, and I just don’t think it’s ultimately safe for me to participate. So I will not be joining this season,” Witney said. “It’s just so hard with COVID-19, we don’t really know what’s happening there. And I’d be pretty big. I’d be about 24 weeks, which is, like, I’d have a belly.”

We don’t imagine dancing while 24 weeks pregnant would be much fun. It’s probably best Witney is sitting this season out.

Witney Is Excited To Be A Spectator

Right now, no one is exactly sure how DWTS can successfully and safely pull off a show during the pandemic. They’re not even filling in cast members. Chances are, even they aren’t sure what will happen yet.

“I’m trying to find out what I can behind the scenes, but they’re not telling me much,” Witney continued. “I think everything’s kind of still up in the air. They don’t really know exactly when they’ll go back to rehearse. Even the premiere date they’re not sure on either, so no solid answers. But I know it’s happening, that’s for sure.”

She went on to say one possibility is to have the show with no audience. Strict social distancing rules are in place in Los Angeles. While that would make sense and minimize exposure, Witney says the audience is where the dancers primarily draw their energy from. Either way, Witney says she’s excited to watch the show from home with her husband, Carson McAllister.

“I finally have someone to watch it with!” Carson chimed in. “I won’t be in the audience by myself.”

While we will certainly miss Witney and Lindsay this season, we wish them the best and hope they have safe, healthy pregnancies. We hope to see them again in future seasons!

Dancing With The Stars will also see a new host this season: the legendary Tyra Banks. Long-time hosts Tom Bergeron and Erin Andrews were suddenly let go. The show cited that they were moving in a new creative direction.

So far, former Bachelorette star Kaitlyn Bristowe is the only celebrity that has been confirmed to compete this season. Who else would you like to see competing for the Mirror Ball Trophy?  How do you think DWTS will pull off this next season? Let us know in the comments.

For more DWTS and other television news, make sure to keep checking back with TV Shows Ace. We’re excited to fill you in on all the latest news!

Joy-Anna Forsyth Under Fire For ‘Reckless’ Mistake [Video]
Danielle Busby Has Mixed Feelings As She Leaves Blayke Behind?
Loren Brovarnik Gets ’90 Day Fiance’ Fans Raving About Her Style
‘Welcome To Plathville’ Season 3 Premiere Date & What To Expect
‘Extreme Sisters:’ Why Do Patrix & Patrica Want To Move To Orlando?