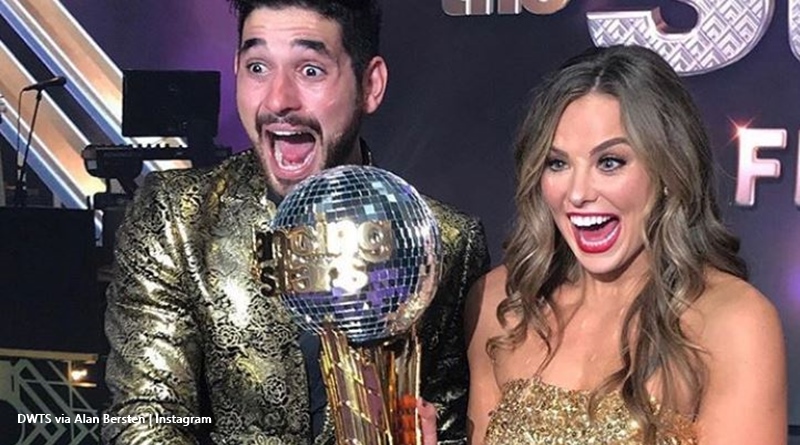 DWTS fans followed Alan Bersten and Hannah Brown through their journey to winning the Mirror Ball Trophy. Through her season of Dancing With the Stars, fans really hoped that she and Alan might get together as a couple. But, Hannah put all their obvious chemistry down to working hard for a common objective. Now, fans heard that Alan who still follows Hannah Brown, wouldn’t mind hanging out for her candy.

Hannah Brown of The Bachelorette really looks so attractive all the time, it seems. In mid- July, she modeled a wedding gown in a cornfield that blew fans away. Looking amazingly elegant, she drew a lot of comments about her beauty. Actually, these days as she works out so hard, Hannah really looks like a good piece of eye candy. And, in another post this weekend, she looked even better, showing off her long legs. It certainly got Alan Bersten’s attention.

Recall that in March, DWTS fans speculated that Hannah and Alan might have dated secretly. However, Life & Style spoke to Hannah’s dad, Robert. They asked him about Hannah dating Alan. “His very emphatic answer included three nos. He said, ‘No, no, no!'” Well, after that, speculation died down, and fans wondered if Hannah moved on with Tyler Cameron again. But that never happened. However, Alan Bersten popped up her page on Sunday and talked about hanging out. But, it’s not for quite what fans might think. It seems the Dancing With the Stars pro-dancer just wants her candy.

Hannah took to Instagram and shared a photo of herself in the kitchen. Looking amazing in only a shirt, she bared those gorgeous legs as she sat on the counter. She captioned it with, “Me avoiding all my house chores today. 🤫” But, she held a giant jar of candy, and that naturally got some comments. Alan said, “I didn’t know you had candy like that! 😳 When are we hanging out again.” Well, people joked about Hannah being eye candy for sure.

Others laughed at the comment and told Alan, “when Hannah finishes her chores.” But talking about various types of candy, one fan noted that Alan and Hannah can’t talk about anything with people “getting it twisted.” “Nothing to see here folks,” said another one. They noted, “DWTS duo just danced, nothing more.” But naturally, fans started their old chorus for the couple to date. It seems fans of the dance partners never tire of hoping they get something together.

Me avoiding all my house chores today. 🤫  📷: @graham.yelton

What do you think about fans still hoping for a hookup between Alan Bersten and Hannah Brown? All it took was one comment about candy to start up the chorus again. Sound off in the comments below.