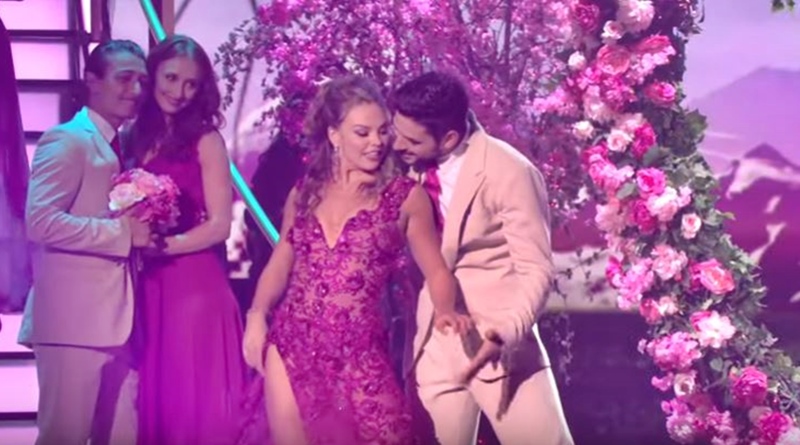 DWTS really hoped that Hannah B and Alan Bersten took their dance partnership into a love affair. Through the season, plenty of fans hoped she’d start dating him. They felt they looked perfect together. But at the time, Hannah and Alan denied it. Now, Hannah’s dad revealed what he knows about them dating or not.

After The Bachelorette, Hannah moved on and joined the cast of Dancing With The Stars. Eventually, she and pro-dancer Alan won the Mirror Trophy. But during the show, many fans saw some chemistry and hoped they dated. She denied it over and over, and so did Alan. Meanwhile, fans also saw her go on Peter Weber’s season of The Bachelor. It looked like she hoped to get back with him. Recall, she ditched him into third place for her affections.

However, TV Shows Ace noted that she seemed stressed about appearing on Peter’s season. DWTS pro, Alan said that she told him some things and he worked hard helping her get her spirits up. If she trusted him with her emotions, does that mean she felt comfortable enough to date him? Fans wondered about that. Now, with the question still out there, her dad talked briefly about it.

Life & Style spoke to Hannah’s dad, Robert and asked him about her dating Alan. His very emphatic answer included three nos. He said, “No, no, no!” In fact, he noted that they say in contact a bit as Alan “texts” him occasionally. Plus, talking about Peter Weber, he noted nothing romantic’s going on.”They’re just friends, they’re just friends. No, there’s nothing more there,'” he said. So, those fans on her Instagram might as well stop asking her to go after Peter since his season ended up with nobody as his fiance.

Now, with the coronavirus social distancing and various quarantines, Hannah’s actually back with Tyler Cameron. Recall the DWTS winner sent him home on The Bachelorette and chose Jed Wyatt. Later, she dumped Jed and asked Tyler for a date and maybe a second shot at it. But, Tyler went off and dated Gigi Hadid.  That never really lasted and since then, Tyler seemed not serious about dating anyone. Maybe they kept in contact and just waited for the end of The Bachelor season so they could pick up their relationship again. Now, she and Tyler and friends stay together enjoying their time during the self-isolating phase of the virus.

Theoretically, if they openly dated while Peter Weber’s season still ran, that would be a spoiler. So, it’s quite possible that she never dated Alan Bersten because she still felt something for Tyler. What do you think? Sound off your thoughts in the comments below.

Remember to check back with TV Shows Ace often for more news about Hannah B, DWTS, and ABC’s The Bachelor.