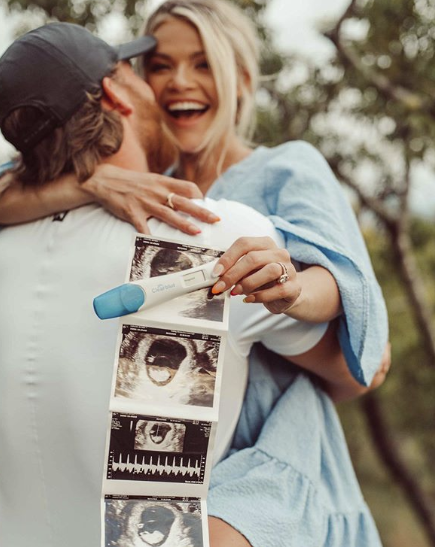 There’s another Dancing With The Stars baby on the way! Just months after her good friend, Lindsay Arnold, announced her own pregnancy, pro dancer Witney Carson has some good news to share too. She and her husband, Carson McAllister, are expecting a new baby in January. It’s one celebrity baby announcement after another!

Baby McAllister coming Jan 2021!!!!! We can’t even contain our excitement and joy right now🙏🏼😭❤️ We found out together with @clearblue , which was so surreal and special! Getting our results in words made this whole thing that much more real! We love this little bean so much already and we can’t wait to start this beautiful chapter in our lives! #15weekspregnant #mcallisterbaby #clearbluepartner #clearblueconfirmed 📸: @jenanderson_photography

Carson and Witney got married in 2016 after dating for four years. Lindsay and Witney served as each other’s maids of honor at their respective weddings, so it’s very exciting they get to go through this pregnancy journey together. We hope the babies will be good friends, just like their mothers.

The 26-year-old dancer is certainly ready to be a mom.

“We’re not really putting a timestamp on it, just when we feel ready,” she said in a 2019 interview with UsWeekly. “I get so baby hungry though. Like, every time I see a baby it breaks my heart. I want one.”

A Long and Happy Dance Career

Witney has a very expansive dance background. She started training at 3 and has competed and performed in many countries. Lindsay and Witney auditioned for Season 9 of So You Think You Can Dance and both made it into the top 20. Witney made it into the top 6 before her elimination.

Check out one of Witney’s fabulous performance from her time on SYTYCD here:

Witney returned to the So You Think You Can Dance stage as an all-star in Season 10 where she partnered with that year’s contestants. She later went on to join the troupe of Dancing With The Stars. She earned a promotion to professional dancer in Season 18, where you can still spot her today, along with Lindsay Arnold.

Witney says her DWTS castmate Peta Murgatroyd has been a blessing during this special time in her life.

“She’s been great to coach us through that and give us advice on, like, how she felt while being pregnant and dancing at the same time,” Witney told UsWeekly. “That’s a big issue for us. Can you start a family and still have a career and still dance? She’s been really good to mentor us through what we would do when we eventually have kids. She’s been awesome.”

Whatever Witney ultimately decides to do, we wish her the best. We have no doubt she will make an excellent mother. Lindsay is expecting a little girl in November, but it’s a little too early to know what Witney is having. Either way, we’re sure the babies will be the best of friends. Perhaps they will even be dancers like their famous moms!

Ready for more celebrity baby news? Make sure to follow TV Shows Ace to be the first to know when we post.