The coronavirus is a very controversial topic and OutDaughtered dad Adam Busby has made his thoughts on it clear. What does the TLC star think about COVID-19? Well, he doesn’t think it’s nearly as deadly or intense as the media is making it out to be. In fact, Adam recently got saucy with an Instagram follower who questioned if he was making the best choices during a pandemic.

Adam Busby will not let COVID-19 fear cripple him.

According to The National Geographic, multiple scientists and medical experts have confirmed COVID-19 is much deadlier than the seasonal flu. Healthline explains there are a lot of reasons why COVID-19 is more fatal than the flu. For starters, it is significantly more infectious. Second, it has a higher rate of hospitalizations. Third, there isn’t a vaccine for COVID-19.

Despite multiple experts and tons of data to support COVID-19 being something to take seriously, Adam Busby isn’t so sure. More importantly, he isn’t a fan of his Instagram followers telling him what he should and shouldn’t do.

The OutDaughtered star doesn’t think the virus is as fatal as people claim.

Adam Busby shared a selfie of himself hitting the gym and his followers had a lot of questions. Namely, they wondered why he was even at a gym to begin with. Was that really the safest place to be with the COVID-19 numbers in the state of Texas? Unsurprisingly, they were quick to call him out on it.

“Do you see anyone around me? If you aren’t comfortable then stay home. I’m not going to hide in fear from a virus that is less fatal than the seasonal flu… have some common sense. Take precautions when needed. Sanitize when you walk in, there are sanitizing wipes to wipe down equipment when you use, enough room to stay a safe distance from people. No need to be crippled by fear in my eyes.” Adam popped off in response to the backlash. 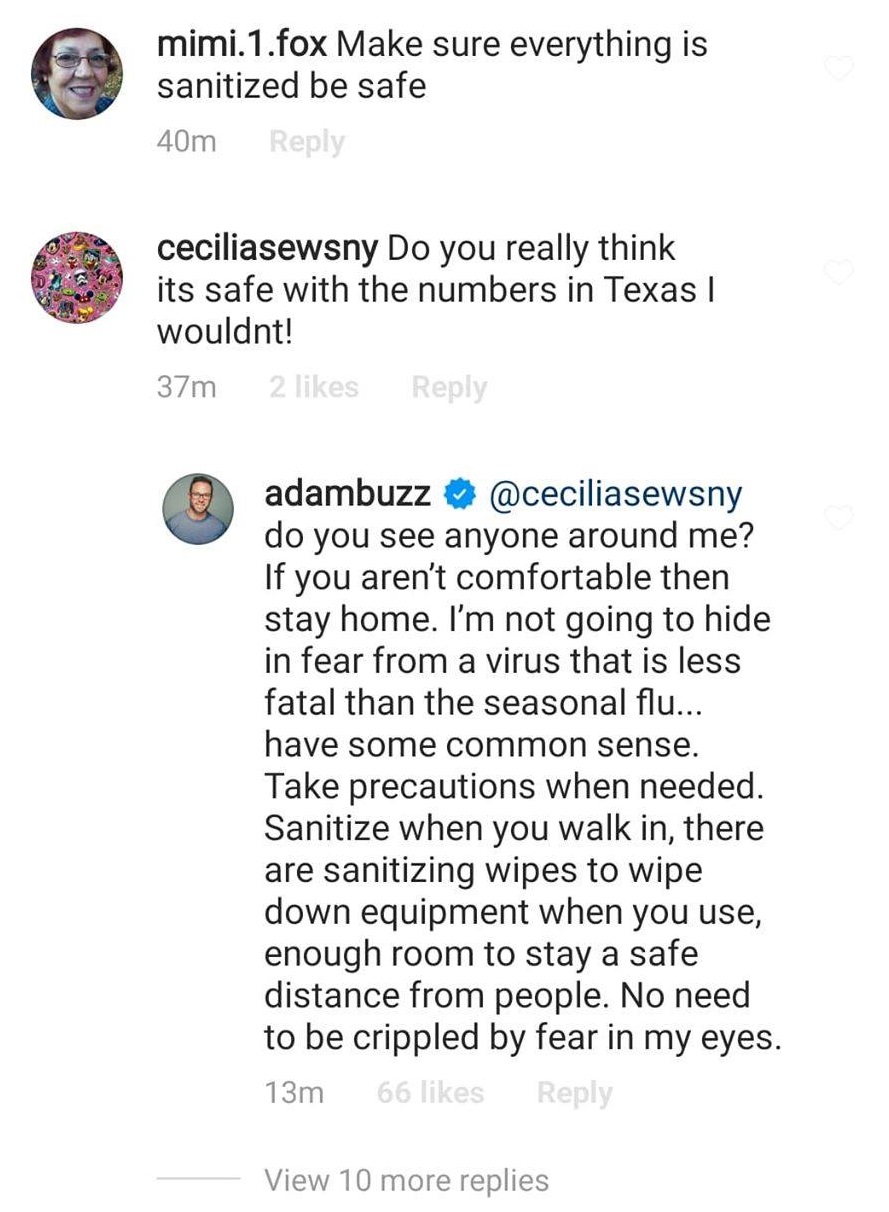 His followers didn’t like hearing him down play the virus.

“Less fatal then the flu? Really wow.” One exclaimed.

Another agreed: That’s not true. Fatality rate for season flu is much lower.”

The TLC star did have a few fans who supported his stance.

While many wanted to slam the OutDaughtered star, he did have some fans that were more interested in showing support. They urged the trolls to back off and let Adam make his own decision.

Haven’t broke out the Jordan 11’s in a while. I can’t be the only one that gets a little extra motivation at the gym depending on my sneaker choice. Mental. oh yea, and i think i found my new favorite workout shirt! #byltbasics #byltbasics #kotd

Update: While it is unclear as to who deleted the comment, the original comment where all of this conversation took place was removed from Adam’s post. Adam has admitted to blocking those who stir drama on his page. So, it could have been him that removed it. Or, it could have been the individual who originally posted it.

So, how do you feel about Adam Busby’s thoughts on COVID-19? Tell us about it in the comments!