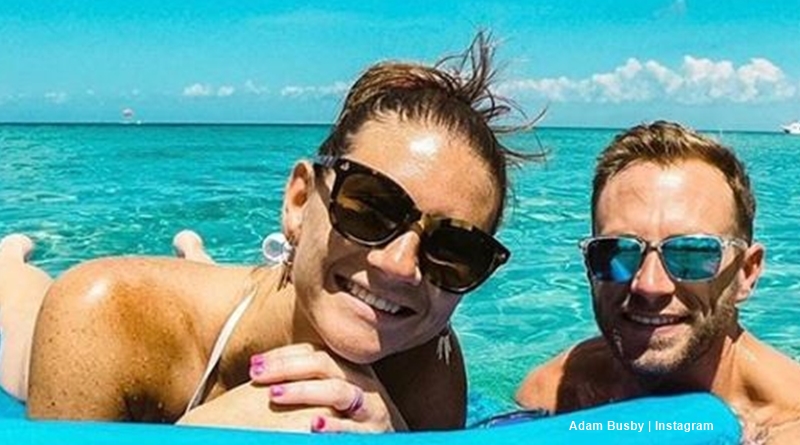 OutDaughtered fans know that Danielle Busby gave birth to six kids. Five of them arrived at the same time. And yet, somehow she looks amazing. On their anniversary trip to the beach, Adam shared some photos of them on the beach together. And, they both look hot as anything. In fact, fans gushed ever the steamy looking photos as they got down to some PDA at the seaside.

OutDaughtered – Adam and Danielle Busby might be the hottest TLC couple

Adam Busby hardly looks like a worn-to-a-frazzle dad in his anniversary photos. And, fans agree that you’d never guess Danielle produced the quints and Blayke. In fact, Adam looks built, bronze, and fit as a fiddle. Meanwhile, Danielle simply takes it away with hotness. The photos he shared showed him picked her up. Then, he kissed her romantically, and finally, he bent down in a dip still holding his slim and trim wife in his arms.

We reported that the photos were taken at Excellence Playa Mujeres. Adam said they went there for a bit of a break for their 14th anniversary. He liked that place only ran to 30 percent occupancy because of the coronavirus. Certainly, it seemed he and Danielle made the most of plenty of private time. Astonished fans simply couldn’t get over how fantastic Danielle looked in her bikini down on the beach. In fact, these OutDaughtered parents of six kids could be the hottest couple on the TLC franchise.

The Blast described the photos of Adam and Danielle as “smoking hot.” And, fans agree with that description. One fan asked, “How on earth does she look so good after all those kids???” When someone suggested “tummy tucks and lipo,” another fan reminded them she worked really hard to stay in shape. After all, she and her sister own Caddi-Fitness and work out daily. One person noted, “I never had any kids and I don’t even look that good!”

And, if you recall in Season 4 of OytDaghtered, Danielle said she works at her fitness levels to keep her body looking good. In fact, she started as soon as she could after the birth of the quints. A few days ago, Adam shared the same hot photos again, and this time he posted up a lot more pictures of the couple. Again, people couldn’t get over how great Danielle looks. Not to mention, they think that Adam also looks super-hot as well.

Thankful for being able to get away and cut up on the beach with my number one. The last pic what it looks like when she doesn’t know you were going to dip… #anniversary #dateyourspouse #itsabuzzworld #outdaughtered

In the second batch of pictures, Adam wrote, “14 Years of marriage to my forever beach babe. We were just babies when we got married, made lots of babies together and I promise to always hold you like my number one baby. Here’s to dipping you on the beach way past we are old and grey.” One of the pictures shows them sitting in a beach chair together and fans are like, “just wow!” Even in the last picture of them both wearing clothes, Danielle manages to convey a smoking hot promise for the night to come.

One OutDaughtered fan mentioned, “I think the last photo answers the question of what’s the secret to 14 years together!” Another one agreed, writing, “Love that last picture! If a husband doesn’t look at his wife like that, you shouldn’t be married.”

14 Years of marriage to my forever beach babe. We were just babies when we got married, made lots of babies together and I promise to always hold you like my number one baby. Here’s to dipping you on the beach way past we are old and grey. #MyForeverNumberOne #anniversary #itsabuzzworld #outdaughtered

Adam and Danielle seem more than just parent goals these days. They also represent marriage goals to plenty of people. What are your thoughts? Sound off in the comments below.