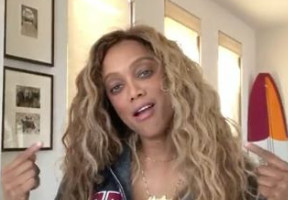 ABC made the formal announcement with this statement: “Tom Bergeron will forever be part of the Dancing with the Stars family. As we embark on a new creative direction, he departs the show with our sincerest thanks and gratitude for his trademark wit and charm that helped make this show a success. Erin will also not be returning, and we appreciate all that she brought to the ballroom. Fans have been rooting for her since she originally competed as a contestant back in 2010, and her signature sense of humor has become a hallmark of the show.”

So, what is this “new creative direction” that DWTS is going in? New host Tyra Banks gushed in an interview that she is super excited to host the show. She is also excited to step into the role of executive producer as well. Tyra wants to give the show a “creative refresh” because she has been a fan of the show. Banks said, “I’ve been a fan of DWTS since its beginning … [DWTS] always transported me to my days of turning it up ten notches on the catwalk.” Tyra is no stranger the to the pressure of performing. The former model knows how to set a stage and play to the audience, and she plans to bring this flair to DWTS.

However, Banks also recognizes the gravity of the role is taking on. Tyra gave credit where it is due saying, “Tom has set a powerful stage, and I’m excited to continue the legacy.” Fifteen years and twenty-eight seasons is no small accomplishment. Banks said she is feeling the “pressure” to make this next season a success.

The fans have expressed dismay and disappointment that Bergeron will not be returning. Many said that they will not watch the show because of the change. This may indicate that Season 29 may not perform as well, but Banks is optimistic. Though details have not been given, Tyra has said, “My goal is for a 12-year-old to be sitting on the couch with their parents and grandparents and everybody can relate personally to what they see on that screen.” But in true host form she is keeping the good details to herself. She simply said, “You’ll have to tune in.” Well played, Ms. Banks! Tyra did say that she would love Miss Jay Alexander, her friend and former judge on ANTM, to compete.

Shows with the longevity of DWTS are rare. Fans have come to expect certain things, so this shake-up may be good or bad. We can’t know how fans will react to the changes. Will they love the new aspects or hate them? We will have to wait and see.

Tyra has said, “It is going to be so next level. Get ready because it’s gonna be different.”