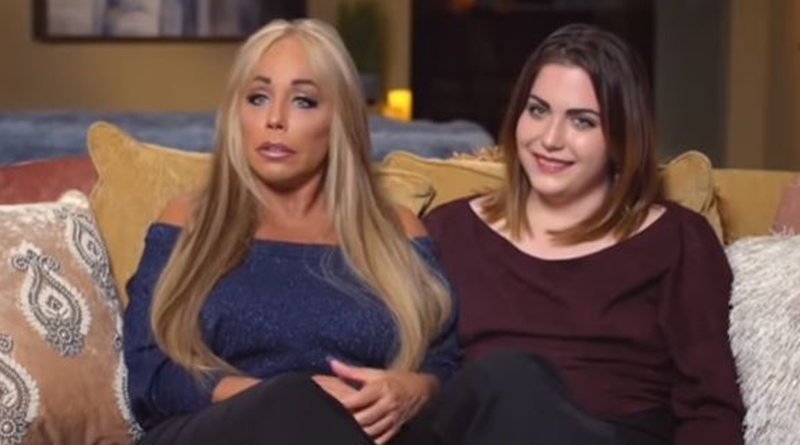 sMothered brings some cloying and sometimes very odd relationships between mothers and daughters. But each week, Brittani and her mom Mary take things to a new level. This week, TLC fans saw a nearly twenty-year-old woman take along a comfort doll to her tummy tuck surgery. Fans freaked out because Brittani apparently works as a corrections officer.

“Disturbing” seems the most common comment on social media whenever Brittani and Mary show up on the screen. Recall, Brittani, now 20-years old, graduated from the academy to become a corrections officer. We reported that Brittani and her mom shower together. That’s because her mom wants to be close by in case of a panic attack. Plus, they also went for colon cleansing together. And, fans thought she showed way too much invasive interest in her daughter’s poopy hole. Now, top that off with joint tummy tucks, and fans just “can’t” with it.

Mary lost a lot of weight at one stage and needed some surgery. But, Brittani hardly looks like the next castmember of My 600-LB Life. Nevertheless, it seems that Mary persuaded Brittani that she’s way too fat. Corrections officers seem the tough type, right? Well, not in Brittani’s case. Fans think she may be the world’s wimpiest corrections officer ever. Firstly, Brittani asked her mum if she could sit on her lap. And, she showed up for surgery with her comfort doll. As you can imagine, sMothered fans found plenty to say about it.

Over on Twitter, the comments about Mary and Brittani rolled in as they do every week. This time, many of them focused on Brittani sitting on her mommy’s lap and taking along a toy. Ahead of the show, Meaww reported that perhaps Frank wouldn’t allow the surgery. But, fans agree that Frank should hightail it out of the weird family. He never wins against Brittani and Mary as he watches adult films and gets accused of adultery.

sMothered fans slammed the odd couple again this week. One said, “I really don’t think Brittani is ready to be a CO. I think those inmates will have a field day with her.” Another one noted, “Didn’t Brittani graduate from the Corrections Academy? Coworkers and prisoners are going to just love her!” Then, one person suggested, “Brittani will be the corrections officer who helps an inmate escape because he says he loves her and tells her she’s beautiful.”

Ya think Brittani takes her doll to work at the prison? #sMothered

Others freaked out because of the doll. One said, “Watching these mothers & daughters on Smothered is more than disturbing. especially Mary & Brittani she’s having plastic surgery but still needs a doll.

my daughter too but this is ridiculous!.”

What did you think about Brittani asking to sit on her mom’s lap? And, the fact that a corrections officer took a comfort doll to tummy tuck surgery? Can sMothered get any crazier? Sound off in the comments below.