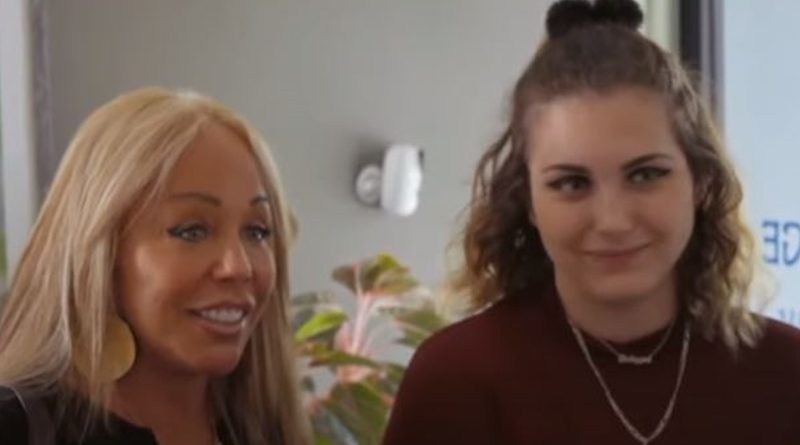 sMothered fans see some weird and bizarre relationships between mothers and daughters. But, the latest episode showed Mary and Brittani going for a colon cleansing session together. For some fans, totally grossed out, the scene just about reached the limits of what they really need to see.

sMothered stars Mary and Brittani shower together as well

Fans seemed rather disgusted that Brittani, 20, hops into the shower with her mom, Mary. Brittani hopes to become a police officer one day. But, she suffers from panic attacks. So, it’s not clear she’ll succeed in her career choice.

However, it’s because of those panic attacks that Mary says she showers with her daughter. She told Monsters and Critics, that the panic attacks started when Brittani got diagnosed with “congenital adrenal hyperplasia (CAH).”

That means the young sMothered star went through “early puberty.” Panic and anxiety attacks can result from the condition. Obviously, concerned that her daughter might experience a panic attack, Mary feels fine with showering with her. And, it seems that Brittani’s fine with that as well. She told the outlet that sometimes she still suffers some anxiety in “closed spaces.” Well, at least one Twitter follower wonders if sharing colon therapy doesn’t also stress Brittani to the point of panic.

During the latest episode, fans took to Twitter during the show and commented on the various scenes. But, when it came to viewers seeing the duo each getting colon cleansing therapy, they seemed particularly grossed out. One critic wrote, “This mom is helping her daughter get a tube in her *ss for a colonic. WHY?!?” That’s when another person speculated its no wonder she gets “panic attacks.”

Another shocked sMothered fan commented, “I don’t know what I’m more bothered by – them doing a colon cleanse together, her sweat stains, talking about FWB, or that the mom inserted the colonic tip and commented on her daughters b-tthole.” Leaving a few emojis, another one noted, “@TLC THESE TWO ARE NUTS!! NUTS!! 🥜 🥜 What kind of goofball has their mother in the room when having a colonic?!?”

So how many of you are going out to get a colonic with your mom? #sMothered pic.twitter.com/taBIQbDllq

Fans think the show is too much

One follower feels the limits of what TLC films really should take a step back. They wrote, “This is the grossest thing I’ve ever seen. @TLC Do you really need to show the tube during a mother/daughter colonic?”

Another freaked-out fan raged, “WHY is TLC doing this to us??! Mary and Brittani legit get colonics this episodes… ON SCREEN!! (sic).”

One sMothered fan even suggested something is way out of line. They posted this tweet:

if Mary is showering and washing Brittani's body it would suggest some sort of incestuous relationship that they've been doing since Brittani was a child. #Smothered

What are your thoughts about Mary and Brittani going to get colonic cleansing together? Are you shocked and grossed out that TLC filmed it for sMothered? What about Mary inserting the tube into her daughter’s behind? Sound off in the comments below.