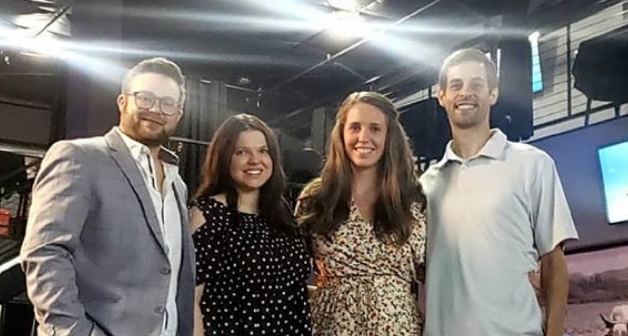 On Saturday, July 18, Jim Bob Duggar celebrated his 55th birthday. The 19 Kids & Counting parents shared a post about his birthday. Plus, Anna Duggar shared a post dedicated to her father-in-law.

The exact details of Jim Bob’s birthday party aren’t clear. But, it looks like at least part of the family got together at Jim Bob and Michelle’s home. Anna reveals that Michelle, Jackson, and Johanna decorated the house for the birthday celebration. There are black and yellow balloons and tablecloths. Jim Bob also got a sunglasses emoji birthday cake.

While the family shared about his birthday on social media, Jill Dillard wasn’t there. She had other plans that night. This is amid the ongoing drama between Jim Bob and Jill’s husband, Derick Dillard.

Happy 55th Birthday, Pops! You are such a fun, patient and adventurous Grandpa! I love the excitement our children express whenever you’re around — you are one of their greatest heroes! Thanks for being such a great Dad, Father-in-love, Grandpa & friend! We love you SO MUCH!!! 💛 • • • #littleduggars #jimbob #birthday

Jill is very close with her cousin, Amy King. Amy is Jim Bob’s niece. While she shares some of the same conservative and religious views as the famous family, she doesn’t adhere to their same strict beliefs. Over the years, Amy and Jill have grown even closer.

On Jim Bob’s birthday, Amy shared a post featuring herself, Jill, Derick, and her husband Dillon. They are at the restaurant that Dillon owns. It’s a wine and cigar bar. Amy writes, “Our new favorite word: Freedom!”

Later, Derick commented on the post, writing, “Thanks for treating us! We had a great time! Good food, drinks, and company (not necessarily in that order 😉” Then, Amy replied to that comment, saying, “We had so much fun! Next time Brunch , drinks and the patio!”

This comes as a shock to Duggar fans who follow Amy. This is due to the family’s opinion of alcohol. They don’t drink it, but Jill and Derick are doing things differently than her family. Of course, it’s possible that they didn’t actually drink any alcohol, but Derick’s comment makes it seem as if they did. Amy’s caption about “freedom” only adds to the suspicion.

So, in response to Derick’s comment, several of Amy’s followers are cheering him on. While many people do love the Duggar family, others think it’s great that Jill and Derick are doing their own thing. Many don’t see anything wrong with having a drink here or there. As TV Shows Ace reports, Jinger and Jeremy Vuolo reportedly had a drink at a restaurant in Los Angeles, California.