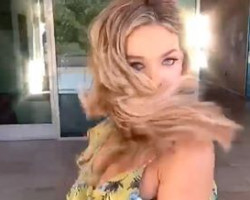 The RHOBH reunion won’t air until later this summer. However, leaks are already coming out about what went down. And the person who was a no-show at the reunion will shock you.

Back in April, several RHOBH stars, including Lisa Rinna, said they didn’t think Denise would show at the reunion. However, Denise has said several times since then that she absolutely would show up at the reunion. And she kept her word.

Shockingly, Brandi Glanville is the one who didn’t show up at the reunion. The drama between Denise and Brandi is heating up next week. As you’ve likely read, rumors have circulated for MONTHS that the two had an affair. On next week’s episode, Brandi confides in the other women that she’s hooked up with Denise.

Denise still denies that the two hooked up. However, she wants fans to watch and draw their own conclusions. Brandi said on Twitter on July 17 that she will address skipping the reunion on her Drinking and Tweeting podcast this week.

I will be addressing the reunion situation today on my podcast so please everyone stop calling me and by the way how do I get my number????? Seriously it’s not that big of a deal

Brandi revealed a while back that she got ‘cease and desist’ orders from Denise. While she didn’t give details about how strict the orders are, she can’t say much about the affair.

Given that the alleged affair is the prominent story in Season 10, one wonders how they can have a reunion and NOT discuss it.

Lisa Rinna took to her Instagram after the reunion filming to vent about the restrictions. Since Brandi wasn’t there, perhaps some of the other stars also got the orders. Lisa posted to her Instagram Stories about how the reunion was “bulls**t” because of the cease and desist. She said that in her six RHOBH reunions, this was the worst one yet.

It’s a truth known to many Bravoholics: the reunions are a lot longer than the 3 hours they air. Typically, the reunion footage is condensed into three one-hour parts. 10 to 12 hours is the standard time for a reunion taping.

On Thursday, July 17, Teddi Mellencamp posted a photo of her looking absolutely exhausted when she woke up the morning after the reunion. In the caption, she writes that the reunion taping was 13 hours.

The reunion is usually the best part of each season. We can’t wait to see it.

Tell us in the comments if you are shocked that Brandi, of all people, skipped the reunion.

The Real Housewives of Beverly Hills Season 10 continues to air Wednesdays on Bravo. The season is only half over.