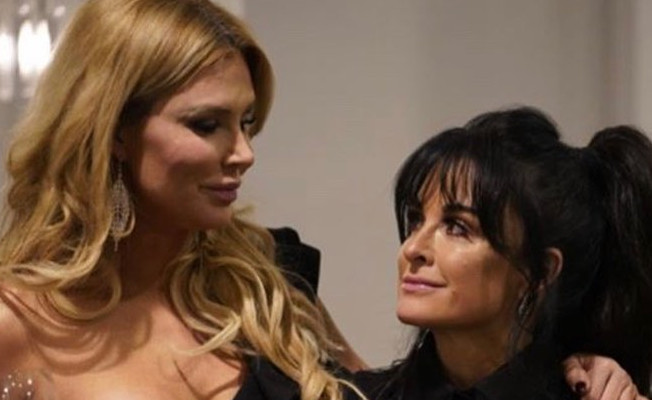 The Real Housewives drama on-screen is just the tip of the iceberg. As any real Bravo fan knows, the real drama goes down at the reunions. The reunion episodes start filming before the season is even over. The Real Housewives of Beverly Hills’ Season 10 reunion went down on Thursday, July 16. Two of the stars posted on social media about their “reunion prep.”

One star’s prep includes getting her face electrocuted.

Every Real Housewives star preps for the reunion in her own way. Some opt for a quick nip and tuck. For Kyle Richards, it means visiting a skincare center for a shocking facial. Literally.

Bravo TV reports that Kyle’s choice of facial involves “galvanic microcurrent to introduce vitamins and minerals to the skin while tightening and firming.” Electric currents. Kyle posted a few snapshots of the various steps of the facial on her Instagram Stories.

As any internet savvy person knows, IG Stories disappear after several hours. Bravo TV captured screenshots of the procedure, calling it “something out of a horror movie.”

Garcelle Beauvais Preps for First Reunion with a Glam Squad

While Kyle gets her face electrocuted, Garcelle’s reunion prep is more lowkey. And electricity-free. She turned to a small glam squad to get her ready for the reunion. In a photo captioned, “reunion prep,” the RHOBH newbie sits in a bathrobe with ‘Garcelle’ embroidered on the back. One woman does Garcelle’s makeup while another is doing her hair. Both women are wearing masks, as California’s COVID-19 cases increase daily.

In fact, the reunion will be held virtually because it’s still not safe to gather on a stage. Bravo has done virtual reunions for several shows, including Vanderpump Rules and The Real Housewives of Atlanta.

Garcelle actually revealed after Episode 10 aired on Wednesday, July 15, that the reunion taping was happening the next day. She took to Twitter to thank fans for watching. She also dropped the tidbit, “we’re shooting the reunion tomorrow.” Garcelle ended the tweet with the hashtag #letthedramabegin.

Fans are beyond ready to #letthedramabegin during an overall boring Season 10. It seems things start to heat up next week when Brandi Glanville tells Denise Richards that she wants to have a “throuple” with Denise and Denise’s husband, Aaron Phypers.

One thing fans WON’T see at the Season 10 reunion is Brandi verbally sparring with former RHOBH co-star Kim Richards. Believe it or not, the two are friends now. Such close friends that they were supposed to go on a speaking tour together earlier this year. The tour was postponed due to the coronavirus pandemic.

Brandi made her first RHOBH Season 10 appearance on the episode airing July 15. She attended a charity gala at Kyle’s house. Other RHOBH alum, including Eileen Davidson and Camille Grammer were also in attendance. Of course, Kyle’s sister Kim was at the gala.

The former model shared a photo with Kim on her Instagram to celebrate their friendship. Brandi being Brandi, she used one of the most iconic insults as a caption. That’s right. She wrote, “sl*t pig 4 life” alongside the photo. During a heated argument with Brandi, Kim uttered the insult during Season 2.

Tell us in the comments if you think Denise will walk out of the reunion or show up at all.

The reunion won’t air until the final episode of Season 10 airs. The July 15th episode was episode 10. Check back with us for updates on when fans can expect to see the RHOBH reunion.