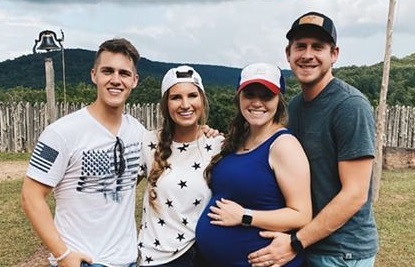 The friendship between Bringing Up Bates star Carlin Bates Stewart and Counting On star Joy-Anna Duggar Forsyth continues to grow. The girlfriends celebrated the Independence Day “the right way,” according to a series of video clips shared on their Instagram Story. Pregnant Joy-Anna Duggar Forsyth and her friend Carlin Bates had their arms tightly wrapped around the waists of their husbands as they went 4-wheeling together.

Joy-Anna and her husband Austin Forsyth are currently pregnant with a rainbow baby. For those unfamiliar with the term, it means they miscarried during their previous pregnancy. Some Counting On fans and critics felt 4-wheeling while pregnant was an unnecessary risk for someone who had previously experienced a devastating miscarriage.

Joy-Anna Duggar Forsyth 4-wheeling was far from the only issue fans and critics had. Where was her helmet? If she was going to take the risk of 4-wheeling while pregnant… Couldn’t she at least wear protection?

In a Duggar Facebook Group, critics discussed the fact that she was sporting backless sandals. After all, it isn’t particularly safe to ride a 4-wheeler with shoes that slip on and off your feet. Here’s what else critics had to say about 4-wheeling while pregnant:

Some insisted it was ‘typical redneck behavior.’

Even in a critic-heavy conversation, not everyone wanted to bash Joy-Anna Forsyth for her decision to 4-wheel. Some insisted it was “typical redneck behavior” and a “common place in the south.”

Some noted they did not have an issue with the activity. They did not like that she wasn’t wearing a helmet. And, they wish she had chosen a more appropriate ensemble. On a caption attached to the video, the Bringing Up Bates couple were careful to clarify they were riding slow. So, perhaps Joy-Anna wasn’t in that much danger.

Here’s what some had to say in defense of her July 4th festivities: