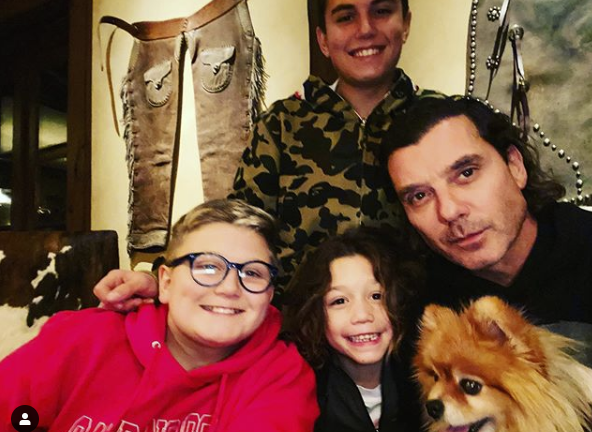 Poor thing! Eleven-year-old Zuma Rossdale broke his arm twice over the course of a few weeks. Zuma’s father, Gavin Rossdale, broke the news to fans while filming a YouTube video. Towards the end of the video, Rossdale describes how Zuma fell off his bike the day before. He broke his left arm, received a gash on his leg, and needed stitches. Rossdale adds that Zuma broke his right arm a few weeks prior to this accident as well. Zuma is the second child of Rossdale and his ex-wife, singer Gwen Stefani.

Gavin Rossdale and Gwen Stefani were definitely a musical power couple back in the day. The pair met in 1995 when Stefani’s band, No Doubt, opened for Bush, Rossdale’s band. They were married in 2002 and divorced in 2015. Rossdale and Stefani have three children together.

The couple initially filed for divorce in August 2015. “Irreconcilable differences” was the reason for the divorce proceedings. Ever since, Gwen and Gavin have shared joint custody of their three sons. Even during the pandemic, the children have been splitting their time between their parents’ places.

Shortly after their split, the pair released a statement regarding their wish to co-parent. “While the two of us have come to the mutual decision that we will no longer be partners in marriage, we remain partners in parenthood and are committed to jointly raising our three sons in a happy and healthy environment.” We are thankful that Gwen and Gavin decided to put the children first.

Although Rossdale and Stefani are no longer together, they both seem to be happy. Gwen is in a relationship with the country musician, Blake Shelton. The couple has discussed marriage before, but the current coronavirus pandemic has made wedding planning a little difficult these days. Any couple will be able to tell you that. Perhaps after the dust settles, we can expect wedding bells. During the pandemic, Gwen has been staying at Blake’s property in Oklahoma.

While discussing Zuma’s injuries, Gavin Rossdale says the injuries occurred “not here.” This may imply Zuma was injured at Gwen and Blake’s place. Hopefully, this will not cause any tension between Gwen and Gavin.

“He’s so brave and he’s so strong … he’s a really tough kid,” Rossdale says of his son. Zuma may be a little banged up right now, but his parents seem optimistic that he will heal. His right arm is healing well and is now in a sling. His right leg remains the only unaffected limb for now. We all know how roughly children play, but hopefully, Zuma will take it easy until he heals. We hope he feels better soon and can get back to playing with his siblings.

Why ‘Love Island USA’ Fans Want Jeremy Hershberg OUT Of The Villa
‘Grand Tour’ Star Jeremy Clarkson Coming Back For ‘Clarkson’s Farm’ Season 2
Is Jessa Seewald Milking Her Birth Story For More Views & Revenue?
Who Will Be The Next ‘Bachelor’? One Contestant Reportedly Getting ‘The Bachelor’ Edit
Fans Worry ‘Bringing Up Bates’ Will Be Canceled Like ‘Counting On’