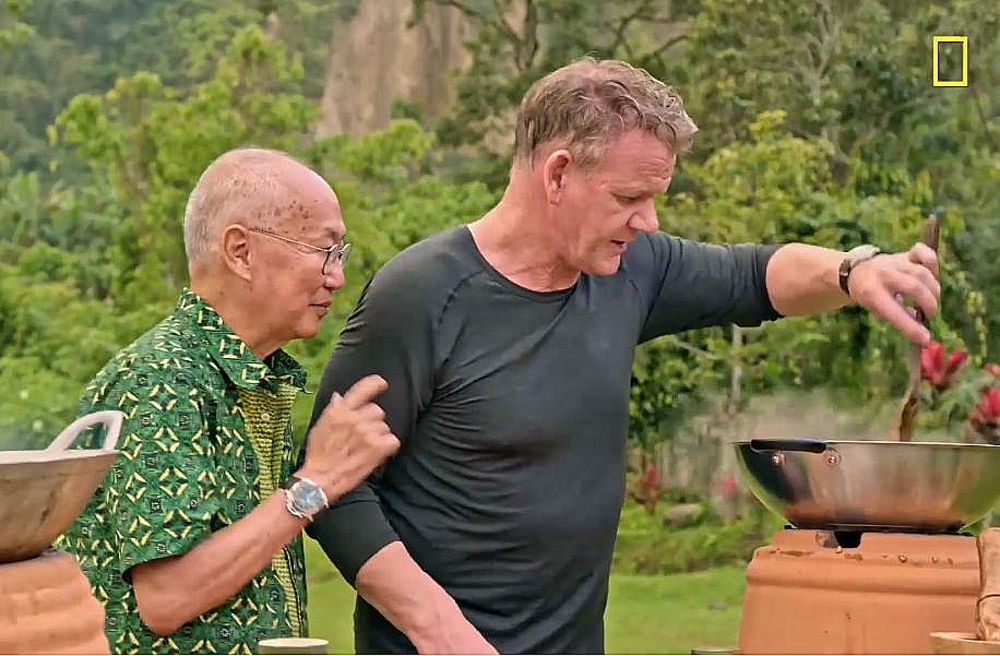 On Sunday’s no miss episode of Gordon Ramsay: Uncharted, we are taken to the lush landscape and bountiful seas around Indonesia as Gordon meets up with legendary chef William Wongso.

Together they embark on making the perfect beef rendang for local VIPs who expect the very best.

Chef Wongso is revered in this part of the world, with his own television show and top honors from worldwide gourmet judges for his cookbooks.

More on him later as TV Shows Ace has an exclusive interview coming very soon with the esteemed chef, all the way from Indonesia!

What to expect on this week’s Uncharted

Gordon Ramsay explores West Sumatra in for this episode of Uncharted, now in its second season on National Geographic Channel. It is Chef William Wongso who acts as Gordon’s mentor in the episode, which also features rendang master Katuju and food writer Ade Putri Paramadita.

Sumatra and all of Indonesia is the realm of famous Chef William Wongso, a man who is as warm as he is talented in the kitchen.

He is their award-winning, legendary chef and he is even a TV personality too. In this episode, he introduces Gordon to the ceremony of the Bajamba where the centerpiece dish is beef rendang.

This thick and hearty dish is a cross between a curry and a stew, and the meat must be caramelized.  You will hear Chef William instruct Chef Gordon in our preview clip below about this rendang requirement.

The second season of Uncharted continues the wild ride around the planet, with more off grid and unusual recipes. Ramsay dives headfirst into the customs of each country and learns about the delicacies and fresh flavors unique to each region.

Past episodes and new friends

As TV Shows Ace previously interviewed Chef Zola Nene, Gordon’s trip t South Africa proved to be an impressive foray into the cuisine of the Zulu nation. Under Nene’s guidance, he learned how to blend the spices and flavors that have been influenced by Indian emigres over time.

The swath of personalities encountered by Gordon makes this series one to watch on Sunday night. It’s a delicious trip around the world.

Another recent episode had us in Tasmania with Chef Analiese Gregory as we learned about the barter culture of the island along with the amazing crays and delicious wallabees, who are really cute too. But it was the amazing whiskey that distiller Peter Bignell made that turned out heads. His whiskey that is produced at the Belgrove Distillery in Tasmania is made with sheep’s droppings. Gordon told him he could make millions if he moved his operation to Scotland.

Tune in as we learn the proper beef rendang begins with a good mashing of garlic, chilies, ginger, galangal, kefir lime and more spices and the caramelizing is easier than it sounds: