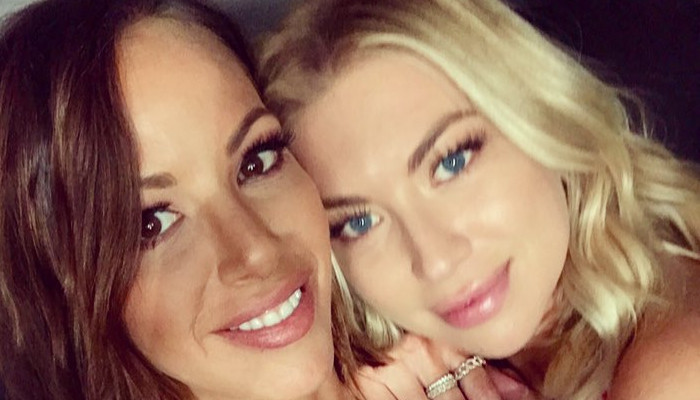 Raise those glasses high and then smash them. It’s time to cancel Bravo’s Vanderpump Rules, if not the entire network itself.

Cancel culture is in full effect, but only selectively. Former Glee actress is facing backlash on social media as more co-stars speak out about their experiences on-set with her. A few of the complaints are about her casual acts of racism. However, most of the complaints at this point are that she’s a b**ch.

Yes, Max and Brett’s tweets were over ten years ago. However, Kathryn’s were recent, but Bravo has yet to fire or reprimand her in any way.

Yet earlier this week, Bravo jumped on the bandwagon of media giants decrying racism. They wrote, in part, that “to be silent is to be complicit.” They’re awfully silent right now regarding new allegations of racism by the cast.

In the midst of the Black Lives Matter movement, former VPR star Faith Stowers has several shocking and problematic allegations about the cast.

Who is VPR Alum Faith Stowers

As VPR fans know, Faith is the SURver Jax Taylor cheated with during the Season 6. Faith was cast as the homewrecker while Jax got yet another free pass. In recent interviews, Faith notes that she never got to tell her side of the story in confessionals.

Instead, the cast attacked her character and integrity with impunity.

Faith was never a full-time cast member of VPR. She ultimately quit the show entirely and went on to star in MTV’s Ex on the Beach. She welcomed her first child in early 2020.

In a recent podcast, Faith detailed just some of the racism and abuse she suffered at the hands of the VPR cast after her affair with Jax came out. An old story Stassi told on a podcast about calling the police on Faith resurfaced after Faith brought it up earlier this week.

According to Faith, Stassi and Kristen Doute saw a black woman on the news who was wanted for drugging men and stealing their money. The woman vaguely looked like Faith. In retaliation for her affair with Jax, Stassi and Kristen called the police on Faith. The call was made under the pretense that she was the person they were looking for. (She wasn’t.)

Vanderpump Rules’ Kristen even tweeted about it way back when.

someone put her on mtv & gave her a platform for press. I didn’t wanna go there but I’m going there. https://t.co/4682a7jyzG

Faith further alleges that ‘Kentucky sweetheart’ Brittany Cartwright referred to her as “nappy,” out of anger about the affair.

While neither of those incidents are outright racist as say, tweeting the n-word, they are clearly instances of casual racism

According to Faith, she wasn’t immune from questionable behavior from even Lisa Vanderpump. Faith claims that she was instructed by Lisa to be “more like The Real Housewives of Atlanta stars,” particularly NeNe Leakes.

VPR’s Stassi Once Posted Photo of Her ‘Nazi Chic’ Outfit

One of Stassi’s most popular social media activities is posting “LOD” or looks of the day. Her look of the day back in 2018 earned her some backlash from fans, but no repercussions with Bravo.

Stassi posted a photo of herself, Kristen Doute and Racheal O’Brien, as identified by People magazine at the time.

The outfits were fine. However, the captions she wrote under each outfit earned outrage from fans. Under Rachael’s photo where she’s wearing a black ski cap, Stassi wrote, “criminal chic.” Kristen, wearing a red bandana tied over her forehead is “Tupac chic.”

Stassi’s non-problematic outfit is accentuated with a visored “ski cap,” which she notes is “nazi chic.”

@stassi Stop posting about supporting the movement when this is what is wrong with America #StassiSchroeder #stassiisracist #Hypocrite pic.twitter.com/mxTLGE72i6

She never apologized for the incident. Rather, she quickly deleted the photo and reposted it removing the nazi reference after fans called her out. Bravo never said anything at all about the faux pas.

Stassi is getting some punishment for her past behavior. Several of her sponsors dropped her, but Bravo has yet to respond to Stassi’s behavior.

It’s Time to Put Those Glasses Down For Good

Vanderpump Rules fans have been raising their glasses high since 2013. The behavior of the then-20-somethings was pure entertainment. Jax cheating on Stassi, getting in fights in parking lots, Stassi threatening to dismember people in vivid detail.

However, in 2020, we shouldn’t tolerate “pranks” of calling the police on co-stars, whether they are black or white. (During Season 8, Randall Emmett ‘pranked’ Tom Sandoval by hiring actors to pose as the police and arrest him. When Katie Maloney spoke up about her disgust over the stunt, her own husband told her to shut up and stop being a social justice warrior.)

Yes, the racist tweets by Max and Brett, and doxxing Faith happened several years ago. But clearly neither Bravo nor the stars of Vanderpump Rules have learned anything in the years since.